...and don't even think about zesting those oranges! Did you know there is a Society for the Preservation of Irish Soda Bread? They take their soda bread seriously!

If your "soda bread" has raisins, it's not "soda bread! It's called "Spotted Dog" or "Railway Cake"! If it contains raisins, eggs, baking powder, sugar or shortening, it's called "cake", not "bread." All are tasty, but not traditional Irish Soda Bread!

Would "French Bread" (15th century) still be "French Bread" if whiskey, raisins, or other random ingredients were added to the mix? Would Jewish Matzo (unleavened bread) used to remember the passage of the Israelites out of Egypt still be Matzo if we add raisins, butter, sugar, eggs, and even orange zest? So why is traditional "Irish Soda Bread" (19th century) turned into a dessert and labeled "Traditional Irish Soda Bread?" OK, maybe you don't like the analogy, but you get the point!

It shocks some people to learn that St. Patrick wasn't holding a slice of Irish Soda Bread in one hand while he drove the snakes out of Ireland with the other. Soda bread came long after St. Patrick in the mid 1840's when bicarbonate of soda (Bread Soda) as a leavening agent was used in Ireland to work with the "soft" wheat grown there.

Poke around there and you will find some interesting tidbits, a lot of history, a wee bit of Irish ire but most importantly, some really good recipes. We made the white bread yesterday and even though I did not have cake flour or a dutch oven, it turned out really good! But please don't tell THEM! 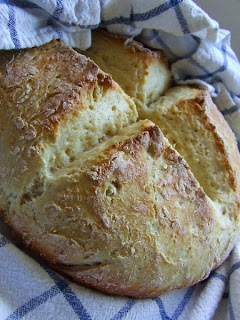