Gone to the Dogs

One of the things we have been working on is healing hearts that are still feeling the loss of a short lived friendship. Husband and I have been trying to find ways for the children to enjoy some furry friends that are comfortable and positive (and not in our home). One of our most favorite attempts thus far was heading out to a local dog show. Please pardon the pictures. I left my camera at home and only had my cell phone with me. These pictures were actually taken quite a few weeks ago, but just now got transferred to the computer to share. 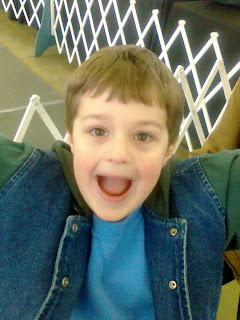 He was just being silly, I couldn't resist. Considering he is our most afraid, BigBoy was very brave with all of those doggies roaming around. 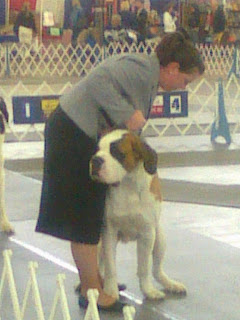 Shortcake's first request was a picture of a real St. Bernard! Done. 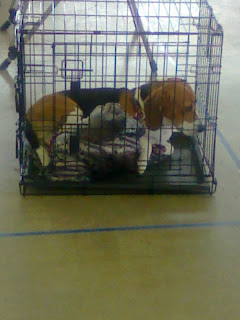 Then a beagle that looked just like her webkinz, Samantha. 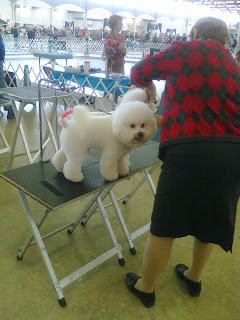 Sunshine prefers the fluffier dogs, you know... Bichon Frise, Pomeranian, Poodle, you get the idea! 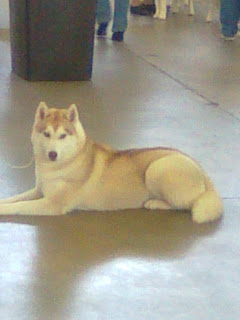 BigBoy admired the Huskies from a far. They do have an acutely intense stare!

It really was a wonderful family activity. There was something there for everyone and the people were very friendly. They could tell we were homeschoolers since it was a Friday and no one had a problem with that. They actually seemed pretty excited to see people who had just come to watch. Everyone else was there to show, I guess.

On the first day, I took the kids by myself and warned the girls all the way there not to expect to get to pet any dogs. I've seen Best in Show, I know what those people are like! (Just kidding.) I wanted them to understand that the show dogs were there for looks, not touching. Well, we got an education, in a good way. Along with the show trials, they also had obedience trials. Most of these dogs are therapy dogs and being around people actually calms them down and makes them behave better. Their handlers were begging us to come and pet them. My girls were in heaven!

Since obedience trials are not breed specific, their urges to cuddle were indulged by a Standard Poodle, Boston Terrier, Weimaraner, Saint Bernard, King Charles Spaniel and two very sweet Golden Retrievers who were as dark auburn as their *Minnesota twin. Hazel and Trigger's owners were incredibly friendly and chatty and gave us quite an education on the breed (Shortcake's favorite now, I'll tell you why later) including why there are so many variations in color. Apparently, since Irish Setters were used in the development of the breed, along with Flat Coated Retreiver, some Bloodhound, and the now extinct light-colored Tweed Water Spaniel, they can vary in color from light blond to auburn. (Personally, I think the auburns are the prettiest! It's the Irish comin out, ay Maggie?)

Husband took the girls back on Saturday which turned out to be Shortcake's best day ever! While they were watching the retriever trials, one of the handlers who had finished showing sat beside them and asked what kind of dog we owned. (We got that question a lot!) The girls asked to pet the dog named Sapphire and she obliged while Husband explained our greyhound disaster to the lady who seemed genuinely interested. When he told her about the attack, she asked which daughter had been bitten. He pointed to Shortcake. At that moment, Sapphire, very sweetly, very gently, gave Shortcake a hug. Her velvet paws wrapped around my girl's waist and a fluffy head, pressed itself to her chest. That day, a bond was formed, a heart was healed and forgiveness was complete.

Did I mention there is another show coming up soon? Guess who'll be there!

Email ThisBlogThis!Share to TwitterShare to FacebookShare to Pinterest
Labels: Doggie Adventures, My Gals