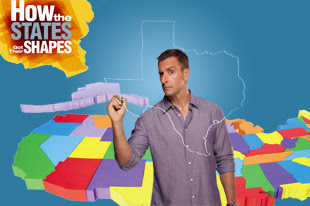 The girls started a Presidential study this past fall using A Presidential Scrapbook. That finished up at the end of winter so we started on a quick jaunt the states to finish up the year using the Star-Spangled State Book. By happenchance, I found this series on Hulu and checked it out before showing it to them. It's a History Channel show called How the States Got Their Shape and I found it delightfully funny and extremely educational. Brian Unger is the host of the show and from what I've seen he is clever, engaging, a little goofy and capable of cracking the kids up on several occasions (which wasn't surprising when I learned that he is a comedian as well as a writer, producer and commentator). The show includes geography, geology and history mixed together in an entertaining format. Some commercial breaks have a little trivia question that is answered when the show returns. It has only recently premiered so the three episodes available are the first three in the series.

P.S. Warning for those with little ones sensitive to language: In the opening of the second episode and in the episode itself, the host says, "holy cr*p" in a unbleeped moment of fear when an Asian Flying Carp jumps up at him. UPDATE: We've watched most of the episodes and there is also some language in later ones. We chose to mute them. If you would like to know more specifics, send me an email.