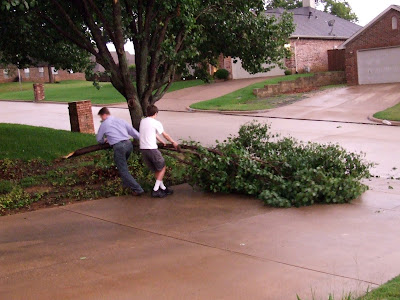 For all the birthday wishes for Sunshine yesterday and the prayers and concern for us last night. We did not sustain any physical damage (only minor emotional damage : ) except one large branch from a tree that Mother Nature is determined to take apart for us one piece at a time. It landed in the driveway but our cars were in the garage so all was well as soon as Husband and The Professor hauled it to the side yard. I don't know if it's official, but it seems there is a consensus that there was a tornado in our area, a few miles to the northeast of us that either dissipated and reformed a few miles to the south or this was a case of two separate tornadoes, we aren't sure yet.

It was pretty scary. We heard the roar as people call it, that sound like a freight train. It was continuous, unlike thunder and it didn't change pitch like an airplane. I've heard it only once before. It's a terrifying sound even when heard from a distance and you just want it to stop. Sunshine's party ended with everyone praying in the storm closet. I'm sure it's a birthday she'll never forget.

Today's party for BigBoy has begun on a bit of a down note. The birthday boy isn't feeling well and might only get to visit the doctor today instead of the LEGOLAND Discovery Center he's been looking forward to. Would you mind offering a small prayer for him? It's not fun to not feel well on your birthday. :(

UPDATE from the Doc's office: BigBoy has a muscle spasm in his neck making it hard for him to look to the left. We will be staying put until that little muscle relaxes back out. Birthday Party#2... on hold for now!