Melanie introduced me to a lovely lady on the internet who graduated from the same university she and I both went to. Now, this wild and crazy gal is younger than myself and from what we can tell, our paths didn't cross on campus, but that has never stopped me from making an acquaintance later!

So I started reading her blog and taking delight in her adventures including one of her latest... sous-chef a la hound. You know how sometimes God puts people in your life at just the right time when you need to hear what they have to say at that exact moment? Well, suffice it to say that recently we have had some tummy concerns with our little Crouton. And right about the time that Dwija posted about her new canine culinary skillz, our pooch went off her kibble. We did not run out, mind you. She just stopped eating it as enthusiastically as she used to. We thought maybe it was the heat, maybe it was a bad batch; it was a new bag but of the same old stuff. It never occurred to me that possibly she was perusing the internet from the comfort of my lap and reading about Dwija's presently pampered pooches decided to stage a Gandhi-esque protest! 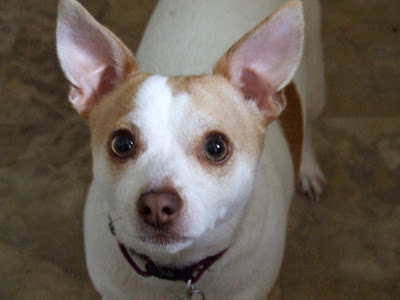 So I reached out to this Dog Whisperer in Training and she so kindly told me everything she had learned about making your own dog food. To put your mind at ease, we did call our vet, whom we love and trust (he has a sister in the same convent as Sean's sister), to make sure that nothing was wrong with Crouton. When I told him that she had gone off her food but was still very much interested in our food and maintaining the same energy level and interest in daily life, he said, "Sounds very normal to me. If you had to eat the same bowl of cereal every day for breakfast, lunch and dinner you'd turn your nose up at it eventually too." After complementing her on her intelligence (must be the terrier in her, certainly not the Chihuahua) he gave me his crash course on what to feed and not feed a dog, how much she really needs (not as much as you'd think) and so, our adventure begins...

I'll let you know how this goes although I will probably avoid any excrement commentary. My first impressions are that it's not as difficult as I thought it would be and Crouton hasn't skipped a meal since we started! Which makes those who love her best very happy!