A sweet friend was asking for a spelling program recommendation so I thought I would share the thoughts I shared with her. First, let me just reiterate that I claim to be no homeschooling guru. I still feel as though I am fumbling my way through. My biggest strength is a husband who is 168% supportive and helpful along with a built-in extended family support group including my children's grandparents who have either been in the homeschooling trenches themselves or who generously give my kids the support they need to be successful. That being said, here is what has worked for us... 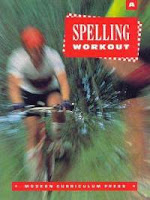 The Professor, along with being a very early, very natural reader was also a naturally good speller. My theory is that children who are predominately visual learners tend to be good spellers because it's easier for them to see the word in their mind. The Professor is primarily a visual learner. (Funny enough, being more visual and less auditory, he will often times mispronounce a word he hasn't encountered before.) He has plenty of auditory learning skills and loves discussion and dialogue, but his visual skills are his primary means of absorbing information. I used an MCP Spelling Workout workbook series (no rotten tomatoes, please! Some kids like workbooks!) because even though I knew he could spell, I needed to check that off my list and he didn't mind spending the two minutes it took to do a page (plus, he liked the sports theme). 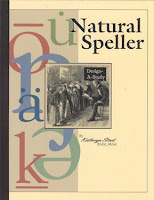 Then came Sunshine. Sunshine was an average reader when she was just learning. She read right on time and at just the right pace; not too fast, not too slow. She enjoys reading and has quite an artistic eye, but her learning style is definitely more auditory based. I remember trying to use that same workbook with her. Boredom. Frustration! Agony!!! Not successful, to say the least. So, going with my developing theory, I got this book as a means of testing my auditory theory, while I scouted around for something better suited.

What I found, that I'm here to tell you about, is the IEW Phonetic Zoo. We have been so pleased with this program. I'm not going to go so far as to say that the girls LOVE spelling, but even they admit that they enjoy the results they've seen. They both recently just finished Level A. Their final quiz consisted of 50 words that they did not get advance notice of in order to study ahead of time. These words were just pulled from the 47 other lessons that came before. Both missed only one word! Whoo hoo!!! 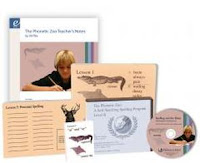 I purchased the Level A starter pack but both of my girls use it and I plan on having BigBoy use it when he's a little older. He's more like his big brother. I dedicated an old CD player and set of headphones as the "Spelling Lab" and watched them go. They sit down, review the words visually on the cards and the jingle or reminder that comes with them, pull up the track for the lesson they are working on, and listen as the man on the CD reads the words to them and they write them down. They attempt to spell the words that are read to them and then go through the corrections at the end of the lesson. Automatic self correction! I have them spend a little time (5 to 10 minutes) reviewing the words they missed because they keep attempting the same lesson until they get 100% correct twice in a row. Which means they each learn at their own pace although my girls have stuck pretty close together. 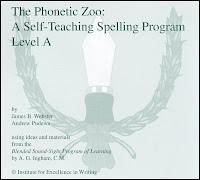 Every five lessons is a personal spelling list. I set up a clipboard with a divided notepad and they kept a running list of words they spelled incorrectly in the course of their other studies along with any words they asked me to spell for them. "Mom, how do you spell..." Those words are the words we added to their personal spelling lists when they rolled around and those are lessons that have to be read by you because they obviously aren't on the CDs. If you listen to a few of the lessons though, you can easily pick up on the format.

So, it's a program that is mostly auditory, but slightly visual, and they are much better spellers now! Is this sufficient proof of my theory? Not necessarily, but we are pleased with the results and that's all that matters.

P.S. If the price is prohibitive, you can order the Budget Package without the CDs and be "the voice" yourself for all the lessons. Since I had two using the same level but moving at slightly different paces, the CDs were a time (and sanity) saver.

P.P.S. I was not compensated for this "review" in anyway. I just wanted to share my enthusiasm for a homeschooling resource we have enjoyed using.