Warning... this is what my brain looks like on very little sleep. It's kind of random. I tend to babble. Feel free to move along.

We've been busy cleaning out rooms, making plans to replace the carpet in the kids' bedrooms but not without painting first, getting to know our new refrigerator....what?  I know it sounds weird, but as a creature of habit, change throws me for a loop sometimes even a simple change like... where does the ketchup go now?

I've also been spending time reading. I've wanted to read some of Elizabeth Gaskell's works for a while now, since I love, love, LOVE the miniseries that have been made of her works. Wives and Daughters,

are all wonderful. You can get the whole collection

here. If you liked Downton

(If you have young daughters who love to watch these kinds of shows with you, Wives and Daughters has two death scenes (not graphic, of course) that might disturb sensitive children but other than that I think it is perfectly acceptable for all audiences. North and South is a little darker dealing with more deaths and a suicide and Cranford has scenes of a medical nature that I know my girls would want to skip. But they are all wonderful for grownups! If you are looking for Mr. Bates, you can find him in North and South. Oh and Carson can be found hanging out in Cranford while Isobel takes to her sick bed in Wives and Daughters.

Anyway, I did something ridiculous. I blame Downton withdrawals. Knowing full well that Gaskell died before she could finish her last and possibly best piece of work, Wives and Daughters, I decided to start with that novel first. Uh huh. I know. Remember the warning from above?

I love this story and I knew she didn't finish the novel. I wanted to know how much of the story I knew (from the miniseries) was her story and how much was conjecture. So I started reading and I was trucking along and pleasantly surprised to see how close to the original Andrew Davies stayed. Exact dialogue in most cases, only a few changes of location, a minor timeline jump and it was getting very far into the story, very close to the end, and my percentage at the bottom of the screen started creeping up to 90%, 93%, 95% completed (I use a Kindle app on my phone) and the story was still following the same path I was familiar with. I was getting excited thinking, "Wow, I can't believe she got this far!" and then...

Right smack in the middle of a chapter.

And I was so... disappointed. 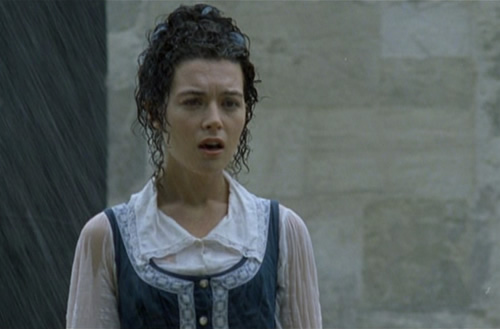 I don't know what I was expecting! Maybe I thought she had written the ending I knew from the movie and then started to write more and didn't get to finish it. Nope.
SPOILERS AHEAD!!! SKIP THIS IF YOU DON"T WANT TO KNOW THE ENDING!

She wrote the scene where Roger waves to Molly and Mrs. Gibson in the rain. She wrote how he's going to miss the coach, so Mrs. Gibson sends him on his way and how Molly follows him around to the attic window and he turns to wave one last time. She wrote all that drivel about Mrs. Gibson's beau Lieutenant Harper and then...

Roger goes to back to stinking Africa.

No romantic run through the rain. No departing coach with all of Molly's hopes and dreams dashed like the puddle it splashed through on it's way out of town. No dripping wet Roger pouring his heart out to our Molly with sheets of raindrops bouncing off his face and overcoat. No.

He goes back to Africa for 6 months. Cynthia has gotten married and is on her honeymoon in France. Molly and Mrs. Gibson are talking about the letters they have received from her and what she has promised to bring for them and then... The End. AND I KNEW THIS BEFORE I STARTED READING and yet I sat there so dejected.

I frantically searched for some clue as to how Mrs. Gaskell wanted the story to end. All I could find was via Wikipedia, so you know, not the most reliable source. It said she related to a friend her intention to have Roger return from Africa and present Molly with a dried rose, the one she plucked from the nosegay and gave to him before she left Hamley Hall. It was supposed to be a sign of his enduring love for her. So that satisfied me a bit. But not much. So here I sit and stew.

Seriously... why did I do this to myself? I blame it on Downton and sleep deprivation.

If you love these stories, like I do, feel free to tell me about your favorite part in the combox.