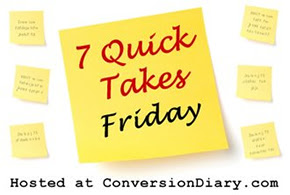 -1-
I realized that I've fallen into the Facebook vortex that I used to complain about before I started using it. It was so frustrating to find out that a blogger I enjoyed reading was posting stuff to FB but not sharing it on their blog. Like everyone else, I have a love/hate relationship with FB. I like that I'm able to stay in touch with my family and some friends who refuse to communicate any other way (you know who you are but you won't see this because you don't read blogs or answer emails) and I like that it is a place where people are having discussions because discussions are fun. But I don't like that I've found myself posting little things there and not here... and it's still a visual train wreck!

-2-
For example... I posted this the other day:
Who told Sunshine that she could take a break from math for the next two weeks to play Dragon Box instead? Oh yeah... that would be me! #homeschoolingrocks

I added this information below:
More information (so as not to cause scandal)... she is only 10 lessons away from finishing her math for the year (7th grade) and they just introduced some algebraic principles. Dragon Box will teach her those principles in a fun way, then I will show her how they apply to her math.
For those of you not familiar with Dragon Box, you can find their website here. I don't remember if Lissa or Karen first alerted us to it's existence so I'll thank both of them! It might have even been something my husband saw in his technology news. I'll thank him later! It is a fun game that teaches algebraic principles without any wailing or gnashing of teeth. I KNOW! Now, it doesn't teach your children everything they need to know about Algebra, but after playing the game and learning the principles, you can write a simple equation and show them how to solve it using what they learned in the game. Even your 8 year old will say, "Hey...wow! I understand Algebra now!" True story.

-3-
My latest children's book rant is with {affiliate link} Mr. Brown Can Moo, Can You?

. This is probably my kids' all-time favorite Dr. Seuss book. Our copy was a much beloved board book that went everywhere with us. I read it so many times I can still recite it from memory. It finally could not be taped anymore so we said goodbye to it and purchased a hardback edition for Cupcake. I sat down to read it to her and found that my eyes were fighting with my tongue. The words on the page were not the words in my memory. What the heck? Instead of Mr. Brown can sound like a cow, on the page it said "Mr. Brown can go like a cow" which conjured up a really disturbing image of Mr. Brown in a field looking for a place to use the bathroom. Seriously! I don't think that's correct grammar. If it is, it shouldn't be. So I put the question out on FB and the friends who responded said their older editions/ board book copies used "sound" not "go". So my question is... who thought they had to dumb down Dr. Seuss?

-4-
We had two kids at the dentist last week and two this week followed by an ortho consult on Thursday! Whoo. Hoo.
The oldest two will be getting braces after Easter... I'm letting them have one last jelly bean filled extravaganza and then that's it! And sweet Shortcake needs a baby tooth extracted because it might be  fused to the bone. Doesn't that sound fun? I never thought my week would end with a call to an oral surgeon. Thankfully my husband saw some of this coming (Shortcake's tooth was a surprise) and was wise enough to have us save up so our financial responsibility is only about "Wow!" How much is "wow"? It's right in between "ouch" and "boing". (Bonus points if you guess that movie reference!)

-5-
Are you a Conclave Junkie? We totally are. There is even a new conclave app! I love waking up and finding out the latest news from Rome so I can share it with my kids at the breakfast table. Which Cardinals hadn't yet arrived. What is going on in the Sistine Chapel. I love that they are 7 hours ahead of us. I love that they think the conclave might begin next Monday, Tuesday or Wednesday.  As I was typing this... they just announced it will be Tuesday. We could wake up to a new pope next Thursday or Friday! Squee!

-6-
Speaking of Cardinals, I really like what Timothy Cardinal Dolan had to say in this video. The vocations crisis we need to address now is to the married life. Amen! Fun little factoid...Why Do Cardinals Have Their Title In The Middle Of Their Name? Click over to the Aggie Catholics blog to find out.

-7-
The Professor takes the National Latin Exam next week. An extra prayer or two would be appreciated (in Latin would be even better!). He's a little nervous. It's his first Scantron test, you know... fill in the bubbles. Those instructions about #2 pencils and filling in the whole bubble are kind of scary. Oh yeah... and then there is the Latin part. :)