WWRW: The Savage Damsel and the Dwarf 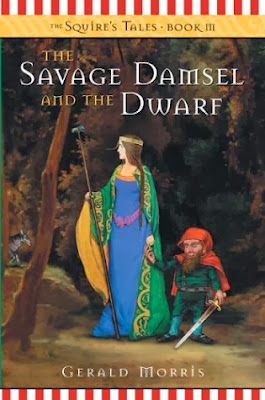 The Savage Damsel and the Dwarf by Gerald Morris
{affiliate link}

The Professor stumbled upon this series at the library last year and loved the first book, The Squire's Tale {affiliate link}, but the second one, The Squire, His Knight and His Lady {affiliate link},  had some odd reviews so I previewed it for him a while back... when WWRW was just a twinkle in Jessica T's eye! One of the reviewers charged the author with being anti-Catholic. I read the second book and my first impressions were that Mr. Morris was trying to show the antagonism between the French and the English knights and maybe some of their customs as well (long standing rivalry there, you know). But then I read a little about the author and found out that he is also a Protestant minister.

That really did put his comments in a different light. I went back and re-read them. I even had Sean read them and he agreed. While the anti-Catholicism is not the overall theme of the whole book it's sufficient enough that it's noticeable. Was it problematic enough that I didn't feel comfortable letting The Professor read the second book? No. He's 15 and old enough to read and then talk with me about these things. His overall impression was, good book but "Bad form!" His favorite thing to do is to re-read books he loves but this one was only read once. We all felt that the anti-Catholic snideness was unnecessary. Especially his characters' comments on what is supposed to be a portrait of Our Lady, who I know most evangelical Protestants have no love for. Sad, because Christ certainly did. (If I had a copy of the book on hand I'd quote that passage here but I don't.)

Anyway, The Professor was content to just let the rest of the series go, but I decided to pick up the third book, The Savage Damsel and the Dwarf {affiliate link},  and see if the disparaging continued or maybe if the author got the snit all out of his system. I am pleased to say that the 3rd book had nothing in it that caused me pause. It's funny and intriguing especially if you know the story that it's retelling: a light and fluffy Arthurian adventure. The Professor has read it now too and he enjoyed it although not as much as that first one. He has asked me to preview the next one. I have a feeling I'll be reading the whole series since he's interested in the others now. But because of that second one I just don't feel like I can trust the author and so I don't feel comfortable handing him the books without reading them myself. So, I read, he reads and then we discuss. It's not necessarily a bad thing.