So, the day after Sunshine celebrated her Sweet Sixteen, we celebrated BigBoy's 11th birthday... Redwall style! Last summer, when he participated in our library's Summer Reading Program and read for enough hours to get to take a ride on a fire truck, most of those 100+ hours were spent reading all of the 22 books in the Redwall series. Yeah. He kind of likes it, I think. 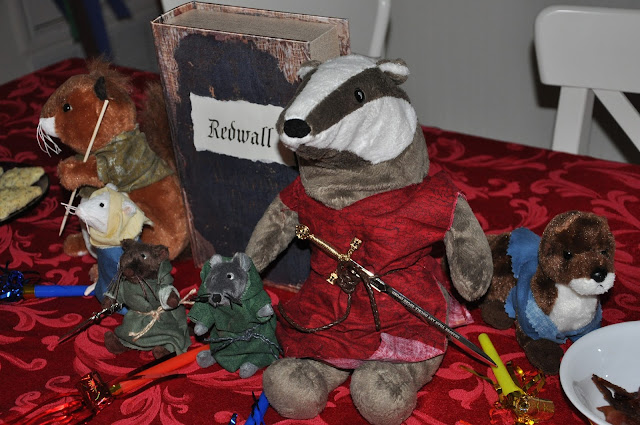 BigBoy has collected stuffed animals for years. He loves especially unusual animals like ferrets and otters, not just teddy bears. He even has a stuffed meerkat that he adores. We took some of his stuffed animals and dressed them up like characters from the book using rope belts, sword charms from the jewelry section of Hobby Lobby and some sword-shaped letter openers we found. Most of the fabric, I had in my scrap box. I did purchase some red for the badger's tunic. He was thrilled with them and hasn't removed their costumes yet.


“Defend the weak, protect both young and old, never desert your friends. Give justice to all, be fearless in battle and always ready to defend the right."
—The law of Badger Lords 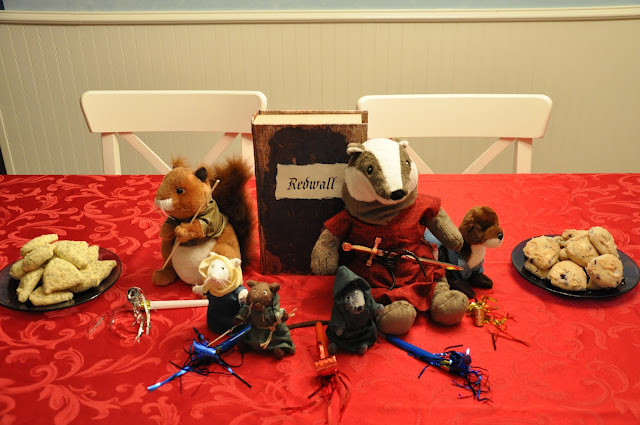 We decorated our breakfast table with a red tablecloth, the characters, a map of Redwall, some favorite quotes and a scone breakfast that Abbot Mortimer would surely approve of. 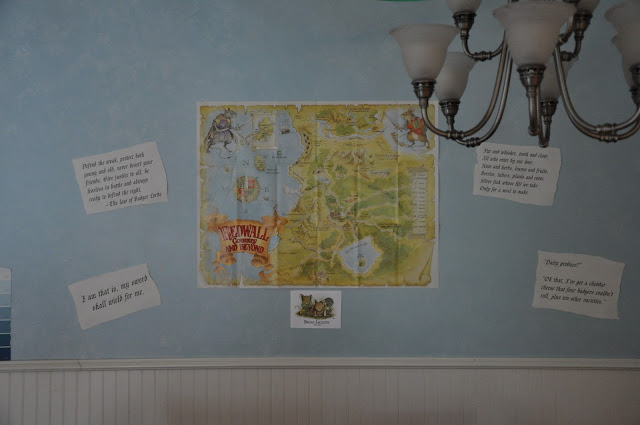 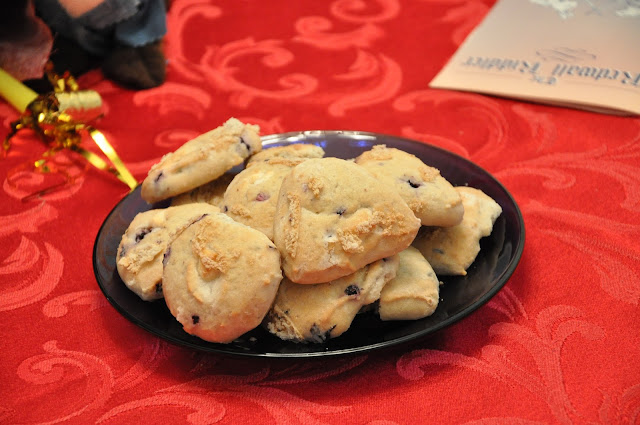 I made a banner using a medieval looking font called Prince Valiant and some artistic representations of Redwall characters for spacing. Lord Brocktree is one of his favorite characters so he had to be included. 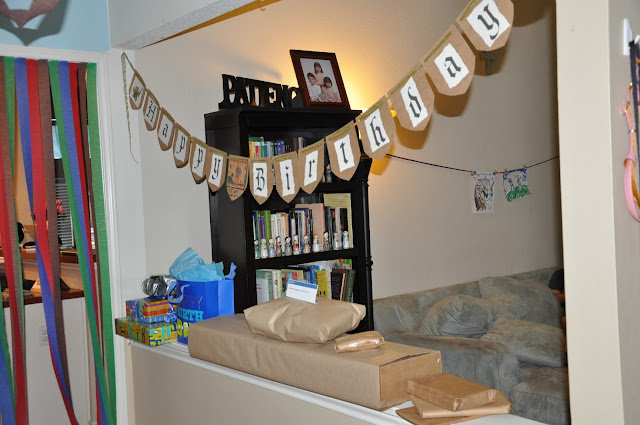 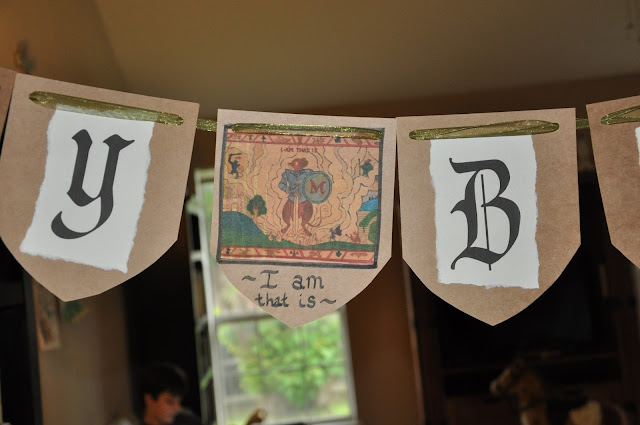 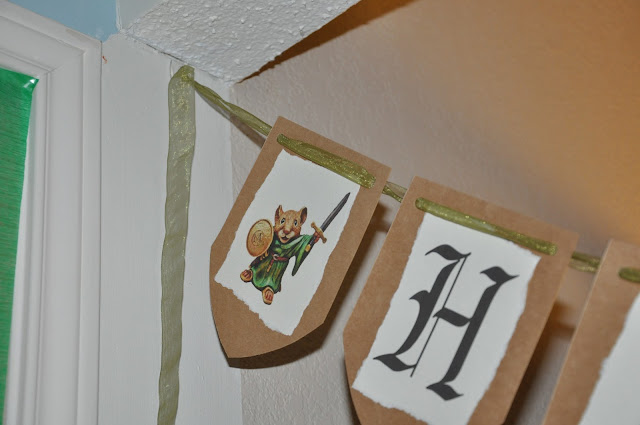 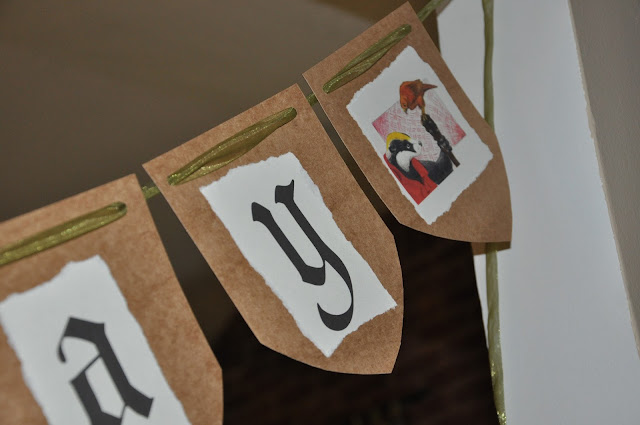 The cards they make for each other are always opened first thing and enjoyed immensely. 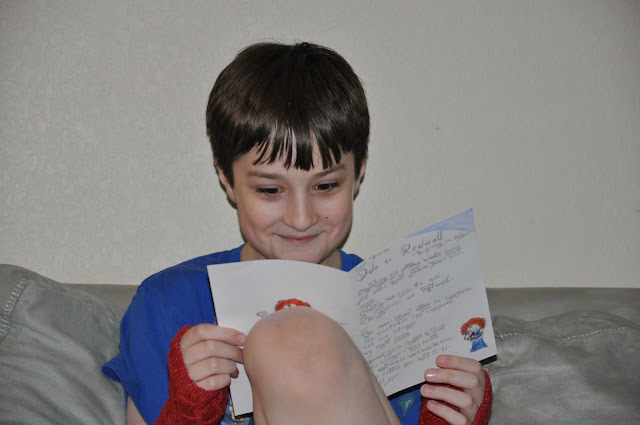 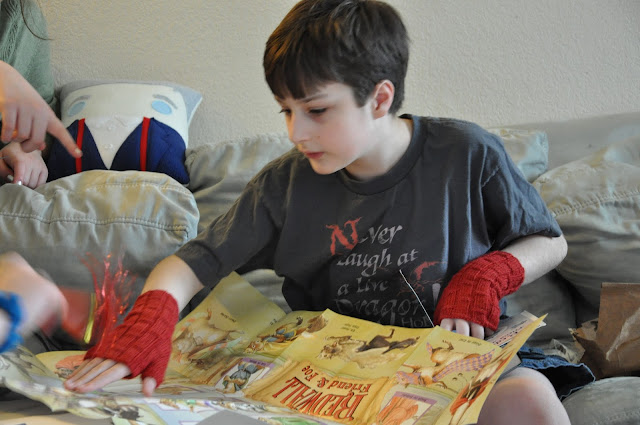 Knowledge is a thing that one cannot have enough of. It is the fruit of wisdom, to be eaten carefully and digested fully, unlike that lunch you are bolting down, little friend.

~ The Feast ~
For dinner, we prepared a Redwall type feast and tried to incorporate some actual dishes mentioned in the books but had to settle for dishes that sounded like they could be in the books. 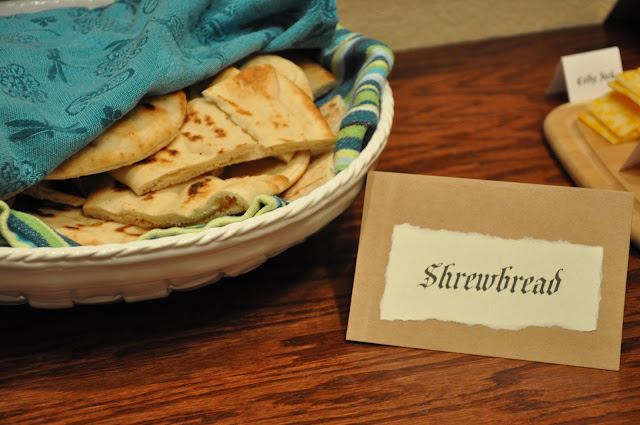 “Dairy produce?”“Oh that, I’ve got a cheddar cheese that four badgers couldn’t roll, plus ten other varieties.” 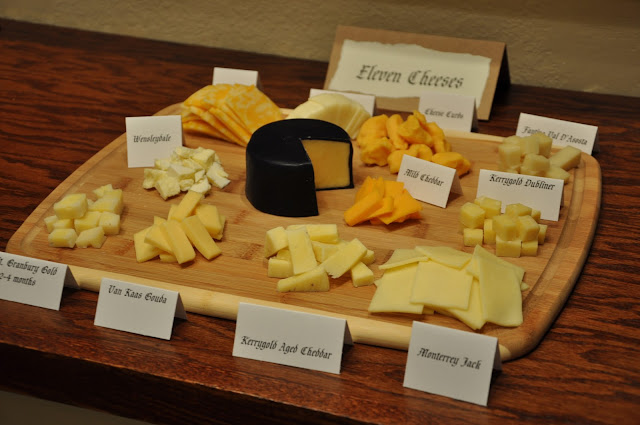 By my count, that makes 11 cheeses for this 11 year old's birthday. So we set out a tasting tray with 11 cheeses on it. 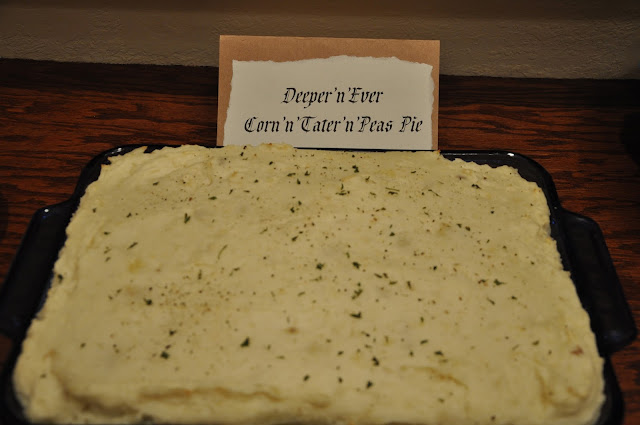 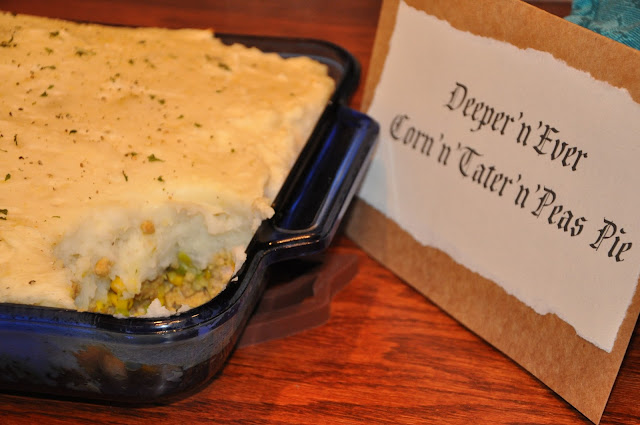 Just a Shepherd's Pie but we made it work. 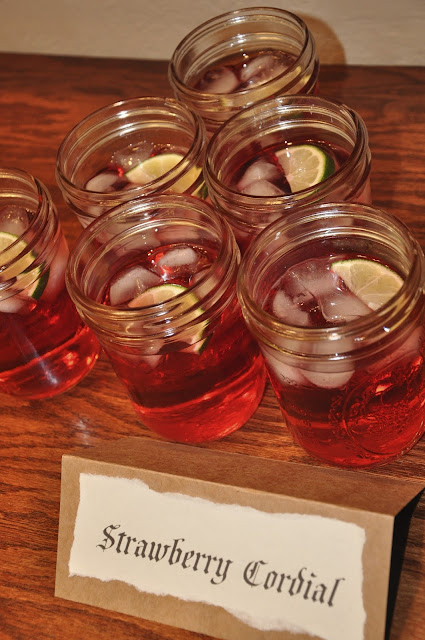 "I am that is, my sword shall wield for me."

I don't usually post about the gifts we give our children here, but this is one I think others might really like to know about. It's a Hero's Edge Latex Rubber Foam Battle Sword that is rated as suitable for LARPing (live action role playing). This thing is heavier duty than something like a Nerf Sword and really well crafted but still soft enough that two big boys can use it for pretend sword fighting (like my two big boys still enjoy doing). 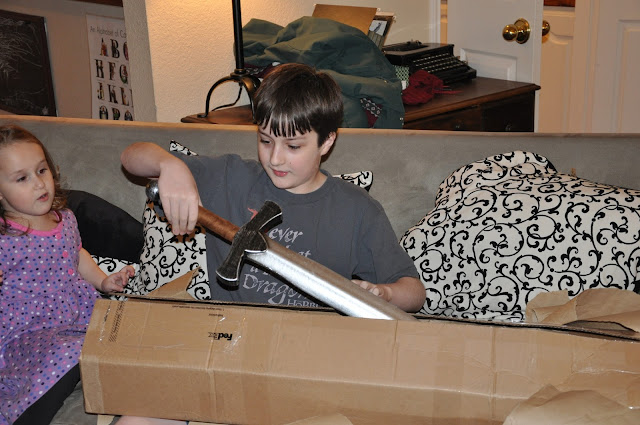 "Who knows, my friend? Maybe the sword does have some magic. Personally, I think it's the warrior who wields it."

Afterwards, Miss Cupcake announced it was time for cake… she takes her job as official party horn blower at all festive events very seriously. 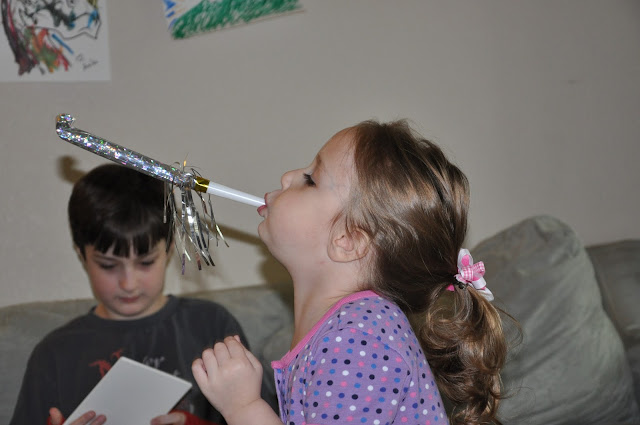 ~ The Cake ~
Oh my goodness, this cake. I had such plans for this cake. I wanted to make a castle and decorate it with little cardboard characters. Maybe some frosting grass and frosting flowers and a little path leading from the front gate. But this boy child of mine had specific requests. Yes to the castle cake pan. OK on the little figures. But he desperately wanted my caramel frosting on his cake. This caramel frosting is a cooked frosting that you basically pour over a cake and let it firm up.Think ganache but brown sugar flavored. You can see it on the cake in this post. There is no way to decorate with it. You can sometimes smooth it out or shape slightly it once it's cooled and firmed up, but even that runs the risk of making it look grainy instead of smooth like it's supposed to. I checked and double checked the whole day through… "So, you still want that caramel frosting?" 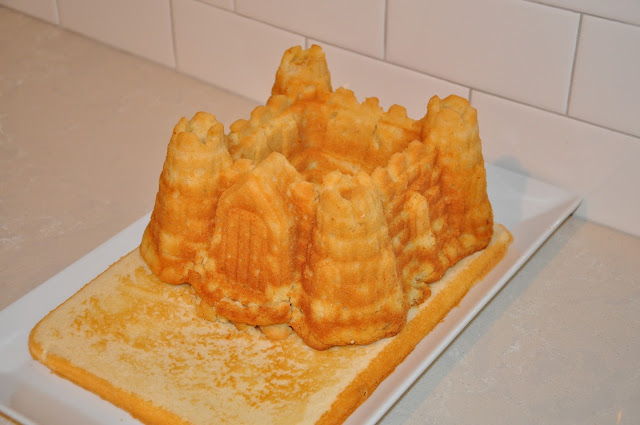 "Look how awesome the castle looks! Are you sure you want that caramel frosting? It's just going to cover it up."

And then even right before I dumped it on the cake…
"I'm just going to dump it on now, okay? That's what you want, right?"

Yes, yes and yes! This big guy knows what he likes.  He still let me use some of my little figures. 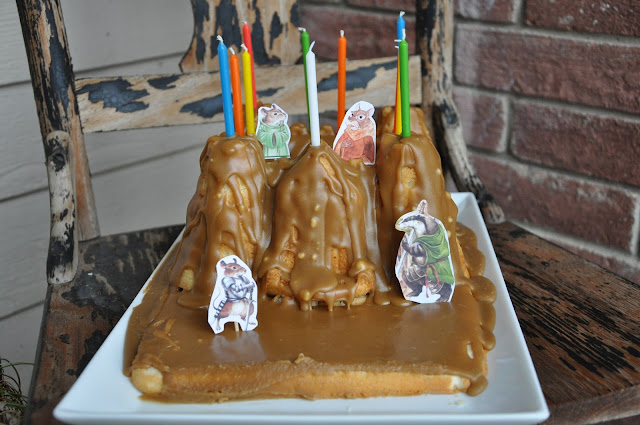 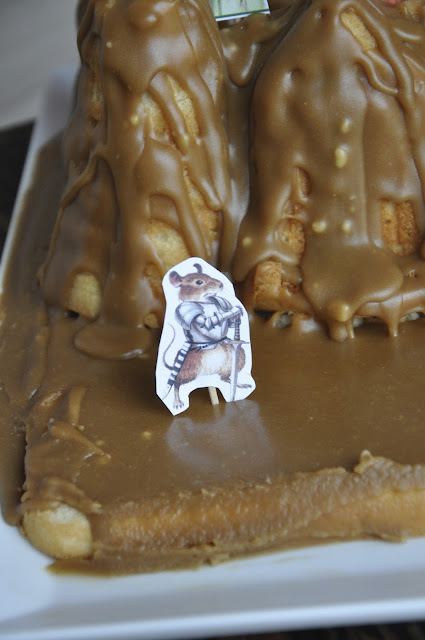 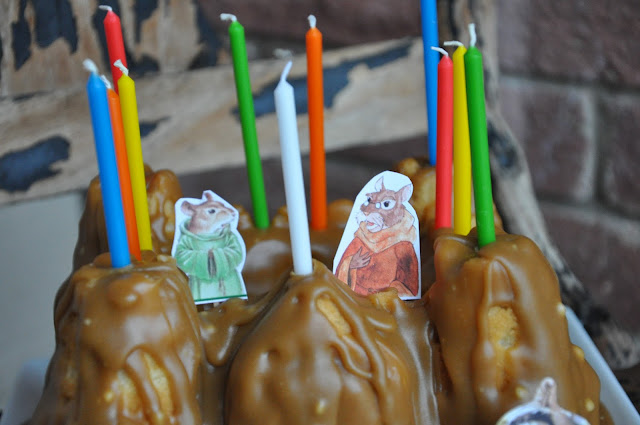 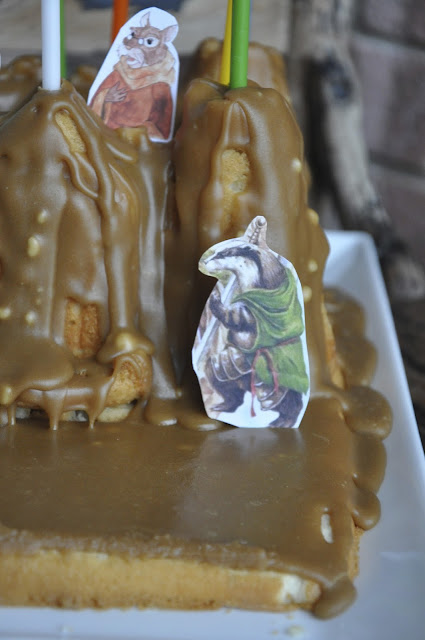 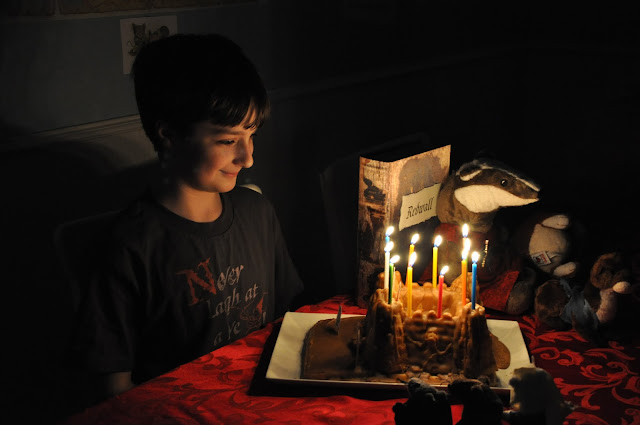 You will always be our most brave, most kind, most amazing Loverlove.