Dawn's husband is a genius! (Scroll down in her post to see his tea drawer idea.) I will let her decide whether or not she informs him of that or decides to keep him humble. 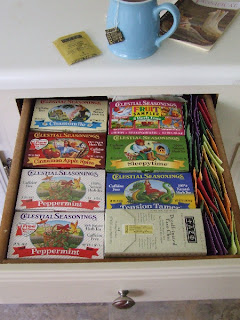 Here is a peek at my tea drawer and it has been such a beautiful thing! Not having to climb on a step stool to reach the tea shelf means that I have been enjoying more tea instead of coffee lately (which is probably a good thing because even decaf coffee has some caffeine in it which is not good for those of us prone to panic attacks). I've even noticed the kids asking for tea more frequently, hence the two boxes of peppermint tea which is a favorite with 3 out of the 4 children in this house. Aslan Tea comes in second. It is actually called Madagascar Vanilla Red but the lion on the cover reminded them of Narnia, so... whoops... looks like I am out if it right now. I guess I better get some more. Um, Mr. Sun and Candlelight, please don't tell my husband about the second part of that great idea unless it is also with a wink and a smile! Thanks!