I truly did not mean to be mysterious when I posted the picture of the ice angel on Christmas Eve but if you read about what my Friday was like the week before last and then imagine everything that happened after that, you can see how I just never found the time to talk more about the picture or where it came from. So, for you dear Margaret, and anyone else who is interested... get ready 'cuz this post is a monster. 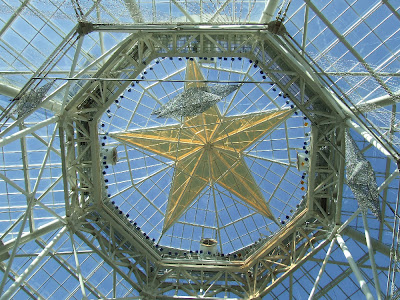 Welcome to the Gaylord Texan Hotel! My Dad and his wife came up the Saturday before Christmas and stayed in this great big palace. We visited with them on Sunday and were treated to a tour of all of the colorful, fun decorations. 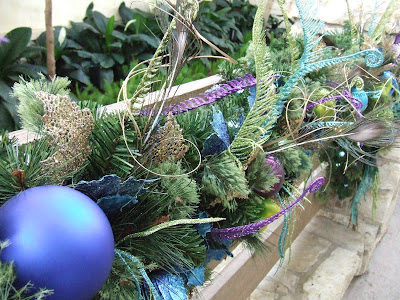 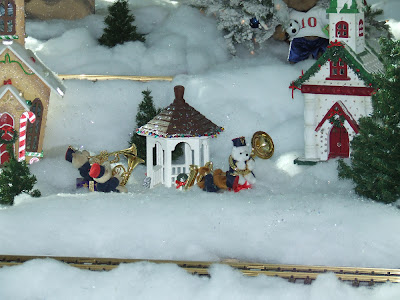 I loved the little teddy bear band although the sax player looks like he stayed up too late jamming the night before. 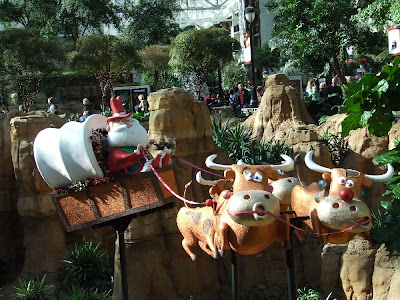 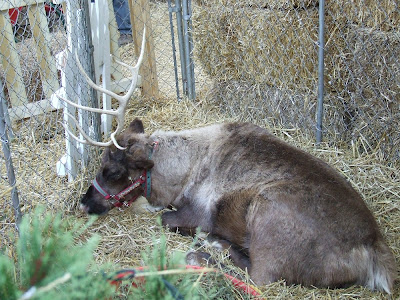 Real reindeer! This guy only had one antler. He kind of reminded me of the Grinch's little dog. 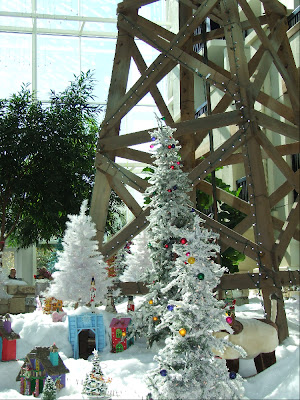 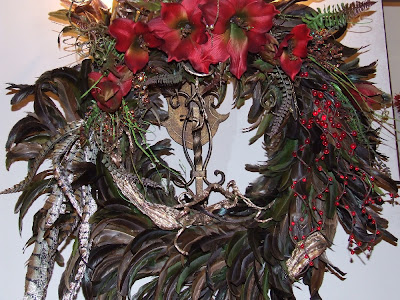 The wreaths lining the walls were made out of feathers. This isn't the best shot, but they were very uniquely beautiful. It's an idea that is definitely getting filed away for next year! 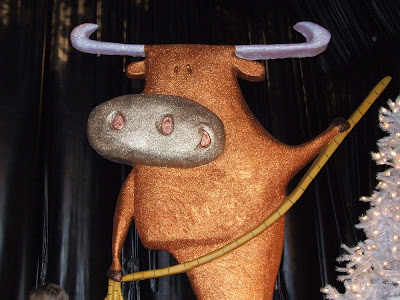 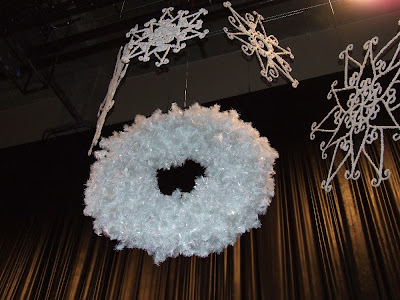 BigBoy was a little confused as to why they would hang frosted donuts from the ceiling and insisted I take a picture of one. 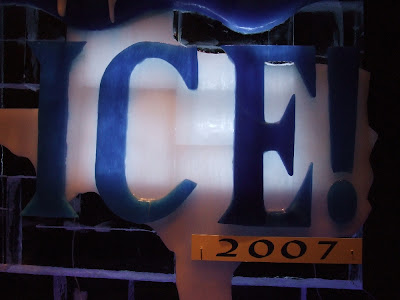 The big attraction at the Gaylord Texan is the yearly ICE show. Welcome to ICE 2007! This was our first year to see it and the kids loved it. It was so very cold! 9 degrees is not a lot of fun. Now if they offered this in the middle of July you would hear no complaints from me! 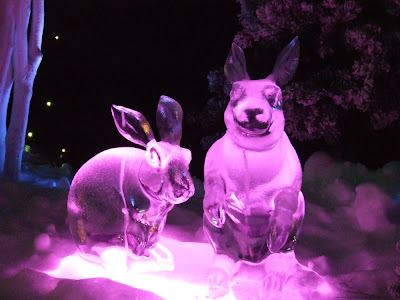 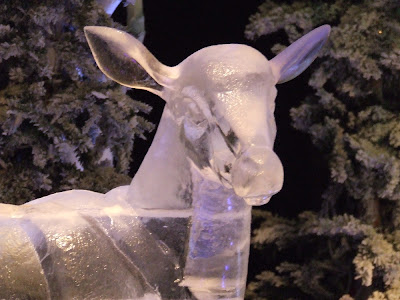 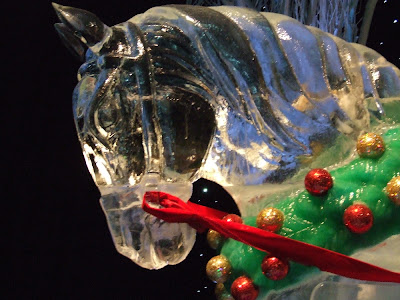 This guy was pulling a carriage that you could actually sit in complete with an ice driver. 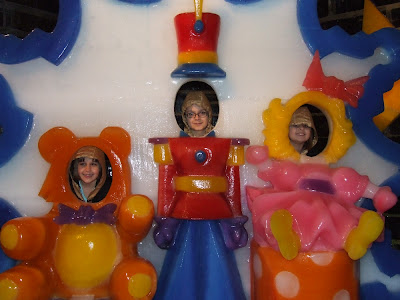 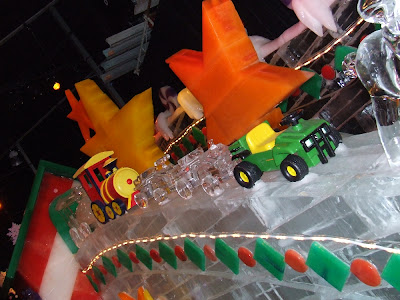 This part of the show was set up like a toy workshop. The toys that were used as models for the ice toys were mingled together in the display so that you could see how detailed the artists' work was. 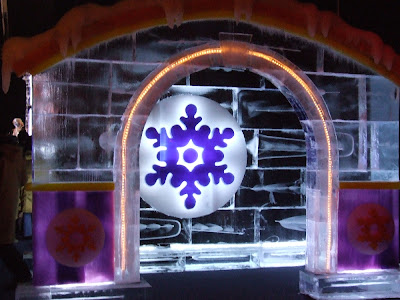 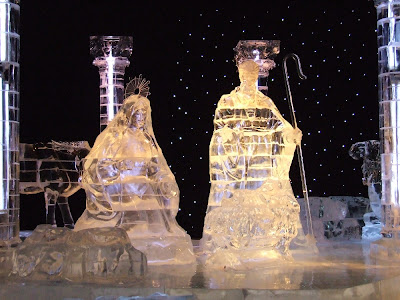 So if you didn't guess by now...the angel came from the room with the gigantic nativity scene complete with shepherds, wise men and a majestic messenger. 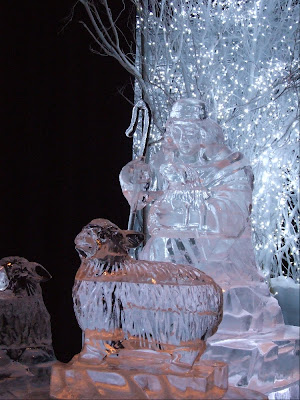 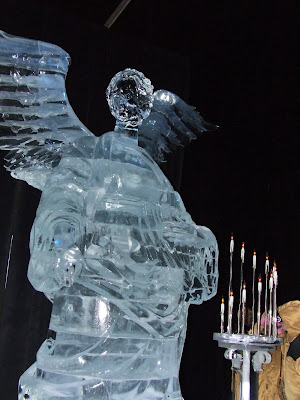 Again, not the best picture but I wanted to show you how tall this sculpture is. Those are adults standing next to him, not my kids. (Everyone is given the same colored parka to wear before they enter the tent.) 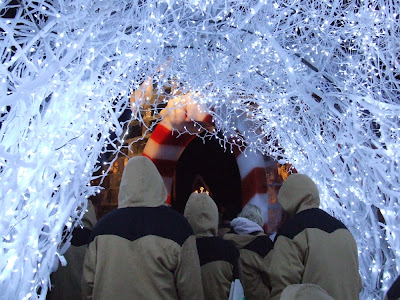 The tunnel leading from the nativity scene into the North Pole room was a tree lined tunnel covered with lights and ice. It was gorgeous! 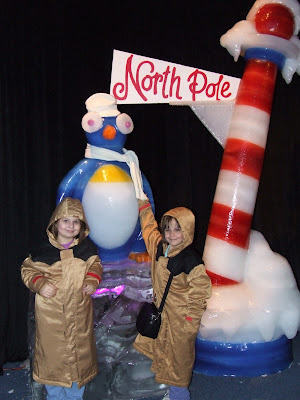 At the North Pole, we found some crazy-eyed penguins and lines of people waiting to zoom down a frozen slide. Should you think that the lack of pictures means we chickened out...think again. You can't take pictures while zooming! Sorry. (It was a blast!)