You might remember back when I posted about our Presidents Day field trip how I mentioned that the wonderful presentation the kids attended was the brain storm of one of the local moms who came up with an excellent way of demonstrating the electoral process. Well, I heard back from her and she gave me permission to share her hard work. I won't share her name out of respect for her privacy, so I will call her Mrs. B. and beg her forgiveness if I get something wrong. (I am going to add in the part I told my kids about the marbles in case it comes in handy for anyone else.) 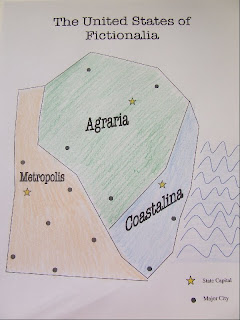 And that's about it. If you want to color your own copy of Fictionalia to use with the explanation, click here. A breakdown of the real electoral college votes per state can be found in this Wikipedia article in map form or in this list by name. I will be pulling this back out come November when I think it will really excite my kids to watch the results come in.