Our sweet little puppy is making herself at home and finding lots of laps available for cuddling... 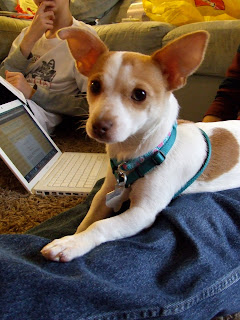 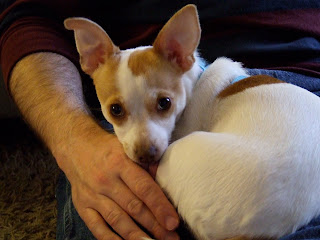 But when a lap can't be found, she makes do with the next best thing... 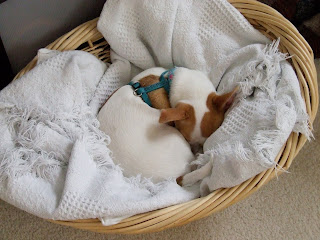 The children think she sleeps a lot, but she is still a puppy. Housetraining has been going so well that we even have her trained to ring a bell on the back door when she needs to go outside. I have been trying to record her doing that, but haven't yet.

). She gets so excited that she runs all around and tries to play with everything, including the things she shouldn't play with. That's made "tidy up time" especially easy and necessary!

I think she's a keeper. Everyone loves her, including the boys who were the most uneasy about getting a dog. I have found that I am much more comfortable with her than I was with Beegee, the greyhound. We used to have medium to large sized dogs when I was growing up. I guess I never realized how much of a little dog person I've become. Shortcake still hopes one day to work our family up to a golden retriever, but our little dog suits us best right now. As a good friend said when I told her about Crouton, "She's not a whole loaf of bread, just a little crouton!"