This Thanksgiving, my children discovered that they really liked pecan pie! But they also really like their Daddy's famous candy bar pie. So we joked about making a pecan candy bar pie by melting a candy bar on top of a pecan pie. Well, apparently the idea intrigued the Professor, so when it came time for his birthday, he asked if there was such a thing or something similar and low and behold... there is!
This is the recipe I used with my notes in blue. 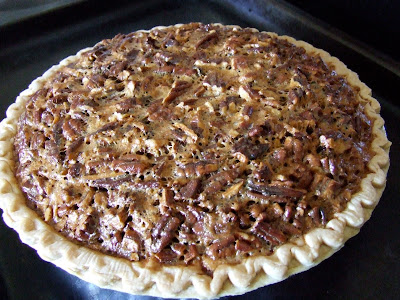 Chocolate Pecan Pie
1 deep dish pie shell (I admit, I used a frozen one. Do whatever you like but it has to be deep dish or else split it into two regular pies.)
3/4 C. white sugar
1 C. light corn syrup (I used a smidge less only because it was all I had.)
1 stick of butter
4 eggs, beaten
1 tsp. vanilla
1/4 tsp. salt
1 bag of semi-sweet chocolate chunks (I don't see why you couldn't use chips.)
2 C. chopped pecans (most recipes I saw only called for 1 C. of pecans but we like lots of pecans!)
Preheat oven to 325 degrees. Pour chocolate chunks into pie crust (still frozen) until you completely cover the bottom in a single layer. (I used about half a small bag.) In a small saucepan, combine sugar, corn syrup, and butter. Melt over medium heat, stirring constantly until the butter melts and the sugar is dissolved. Set aside and let cool.
In a large bowl, combine eggs, salt and vanilla. (OK, some people say you can add some bourbon or Kahlua to your pie if you want a more grown up taste, anywhere from 2 to 4 tablespoons. I opted not to since I didn't have anything on hand and this was for the children, but did add a tiny splash of rum extract, maybe 1/2 a tsp.) Mix well. Slowly pour sugar mixture into the egg mixture, whisking constantly. Stir in pecans. Pour mixture over chocolate in pie crust. Bake in preheated oven for 50-55 minutes or until set. Can serve warm, room temp, or chilled.