Let me preface this post by saying we have always expected our children to do chores. Not just tidying up, but help with laundry, dishes and keeping the house clean. I know there are some moms out there who want things done a specific way and they have a hard time letting someone else pitch in and help. In that case, I say, "don't gripe about how much work you have to do then, ever!" Also, while there are some chores that we have designated as "boy chores" and "girl chores", I expect my boys to do dishes and laundry just like my girls are perfectly capable of taking out the trash and learning to mow the lawn (provided they ever grow tall enough to see over the top of the mower handle). I don't abide by the "the house is the woman's work" philosophy and neither does my husband. In our house, if you live in the house, you help take care of the house. Period. 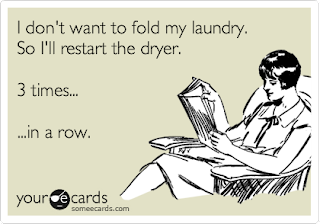 Kernel of truth...amiright? Most people think laundry is a pain. It shouldn't be hazardous to your physical well-being mind you! (Dwija, I can't wait to see your laundry room makeover!) Very few mentally balanced people wake up giddily excited that they get to do laundry that day. Especially when you have a larger than average size family. More people means more clothes, and unless you are fortunate enough to have two washers and dryers you are probably going to be trying to clean those clothes on the same machine setup that a single person uses for just themselves. I can't speak for the more-than-5 kids-families yet, but I have noticed a couple of changes we've made that have helped tame the laundry beast.

Yep, you read that right. I changed my attitude. I went from thinking that laundry was something to be accomplished and completed to accepting that as long as we were wearing clothes every day, there would always be laundry to do every day. Think about it. 7 people all wearing shirts and shorts or skirts, and underwear with some of us also wearing socks or undershirts makes for about 30 items of clothing. That's almost a full load right there depending on the size of the garments and the size of your washer. Times 7 days and that's a minimum of 210 items needing to be washed. And I'm not even including sheets and towels in that count. Ain't no way you can save that up and do it all in one day! So make it a part of your daily routine. Start a load first thing in the morning, every morning! Just do it. 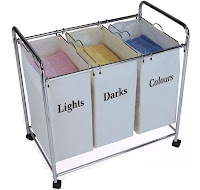 Well, this wasn't really a "change" since we've done it this way since we first moved into this house. I can't stand the smell of dirty clothes in my kids' rooms. Stale and musty smelling ick! I first bought a 3 bin laundry sorter

{affiliate link} and put it in the hallway outside the kids' rooms. I taught them from the earliest ages possible how to sort lights, whites and darks. It started out with labels over the bins and pictures for example. They don't need those anymore. They take their clothes from the floor after they've changed and deposit them immediately in the appropriate bin. As the girls have gotten older, we added a smaller separate bin for delicates.

3) ONE laundry basket (to rule them all!) 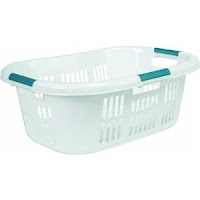 Yes, I waxed poetic about those crunch cans in this post from ages ago and we used them for a good long while, up until this past year actually, but as they got older they stopped crunching as conveniently as before and became hard to carry as the handles stretched out due to hauling heavy loads. I still have mine saved in my linen closet but for laundry we went back to the tried and true laundry basket

{affiliate link}. But only one! Otherwise you end up with a bunch of clothes that take up permanent residency in the baskets. Not efficient and the surest way to make me start feeling like a laundry failure. When I noticed that my kids were letting clean loads pile up, we had a little chat. I showed them using a timer that it really didn't take that long to fold a load and put it away. With one laundry basket now, they kind of have no choice. :) 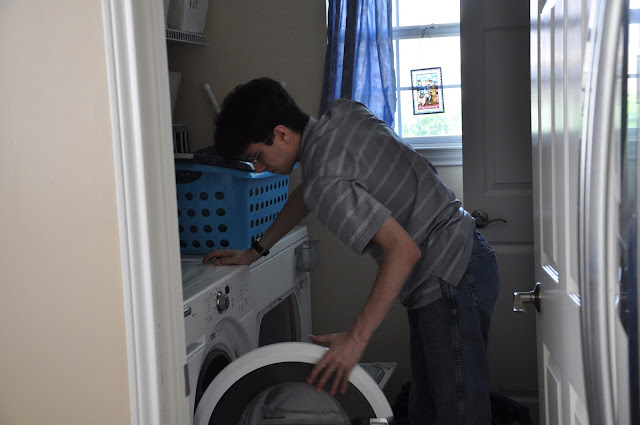 The most recent change we made was reassigning laundry duties. I had the oldest three set up on a weekly laundry assistant rotation. They were responsible for washing one to two loads of laundry a day including folding and then making sure the others came and put their laundry away. They did this for a week before it rotated to someone else. It was working out OK but I started noticing that some were better at remembering their daily loads than others and clean laundry was starting to pile up on the dryer and take a while to get put away. And I saw that BigBoy, at the newly turned age of nine, was  more than able to tackle some of the laundry chores too so it was time to throw him into the mix. So, we made a switch recently.  I purchased a separate set of sorters for the boys and gave the three bin sorter to the girls. The girls now wash, dry, fold and put their laundry away completely on Mondays while the boys have Tuesday as their laundry day. The Professor is usually the one to get the loads started while BigBoy comes in to help switch loads, fold and help put away. They actually enjoy folding their laundry together now in their room where it gets put away immediately while they chat.

The change has been tremendous! They work together as teams to get 2-3 loads washed, dried, folded and put away. Most days they are finished using the machines by lunchtime! They are only responsible for their own clothes which means they can take the basket into their room and not have to worry about having clothes from other people to deal with. It also frees up Wed-Fri for me to do laundry for Sean, Cupcake and myself. (Saturdays are sheets and towels and everyone pitches in as needed.) Previously we were trying to combine loads into a communal kind of laundry system. I couldn't tell Sean's t-shirts from The Professors and don't even get me started on who's socks those are! It's so much nicer now to be able to do our clothes the way I prefer. (MY WAY!) For example, I like to hang up Sean's work shirts as soon as the drier buzzes so they are easier for him to iron later.

Yes, ladies... he irons! Why? Because he was one of nine children and his mother didn't have time to iron every one's clothes so they ironed for themselves! Start training your sons now because we are training our sons and I want some excellent marriage candidates for my daughters! I hear a lot of moms of big families complain that they just don't have time to do it all. To those ladies, I say, "God gave you some amazing helpers! Use them."

Wow, this turned into a longer post than I thought when I started. My original idea was to just update those laundry room posts from 2008. I know that our way isn't going to work for every family. I never claim to be an expert with all the answers. I just wanted to share what's been working for us and hope that it might help someone else.

Email ThisBlogThis!Share to TwitterShare to FacebookShare to Pinterest
Labels: Homemaking