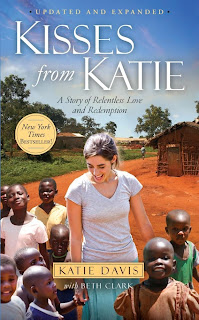 Right now, I'm in the middle of reading Kisses from Katie

which loads of other people have reviewed. I'm not finished with it thanks to a teething toddler and a tummy bug in the house not to mention some sewing projects. So far, it's really lovely. I must admit that I tend to shy away from books like this usually. I have the tendency to be a little too scrupulous and think, "If I'm not feeding the poor in Africa  like Katie then I'm a total failure at charity!" But what I've really liked about this book so far is that Katie makes it very obvious that God inspired this deep love for the Ugandan people in her heart and it's made me take a few looks around at what God has inspired in my heart that maybe I'm just not listening to.

For example, we have a CFCA sponsor child (from Uganda actually) and just the other day we received a letter from her telling us about her scores in school and how they were really bad this past term because she'd been sick. I was inspired to call CFCA and ask if we could find out how she was doing now and whether this was a serious illness or not. I was also inspired to think about those I know here in town who are sick right now and talk to the children about what we could do to help them. Katie's story is an amazing one, but it's her story and it's not going to be like anyone else's story. But that doesn't mean my story isn't just as meaningful. Of course it is, because it's mine. God gave it to me. I need to listen to Him and follow His inspiration.

My sweet Sunshine has been asking to read it and with some kids still feeling puny, I don't know if I'm going to be able to finish it soon enough for her. If you've read it, could you let me know if there is anything in it that a sensitive 14 year old girl might be traumatized by? Thanks!