My three oldest kiddos participate in a teen/tween book club once a month that is hosted at a friend's house. I could tell that BigBoy was kind of in need of a little something similar to do that was geared more towards his age group. Remembering the fun book clubs we used to have here for the older ones when they were about his age, I decided to jump back into book club hosting mode and put out the call to our local homeschooling group to find some like minded friendly readers. 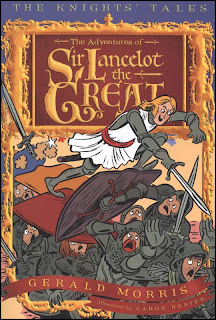 We got a good response and had our first meeting last week discussing The Adventures of Sir Lancelot the Great by Gerald Morris {affiliate link}. This was BigBoy's pick. He loves this whole series {affiliate link}. I asked him to recommend something short and fun for the first meeting since we didn't quite have a full month to read the book. We are calling the group "Book Club 9-1-1" because it's for 9-11 year olds specifically. We have a few 8 year olds who are strong readers and who will be turning 9 this year and I'm sure if we had a 12 year old who was really interested in joining I wouldn't say no, but for the most part, the 9-11 crowd is a good age range to work with. I'm following a basic format of discussion, craft/activity & themed snack.

~ Discussion ~
My primary focus is on discussing the book. I even told the parents that if their child doesn't read the book, they shouldn't come to book club. (I hope that's not mean.) This is not just a play date or a social club, it's supposed to be about the books first and foremost and getting kids exciting about reading and exploring them. I came up with talking points and led the discussion. (I have uploaded all of my documents to Scribd so you can use them if you wish for your own personal use.) The talking points are a rough outline of things we discussed starting with discussing the book but then focusing mainly on the Papal coat of arms in order to lead into the activity. I printed out a copy of the three most recent ones and explained what each symbols meant and why it was chosen by the Pope who chose it. (Those can be found on the Symbols document. Sorry it's not better organized. I didn't think of sharing the documents until after the fact.)


~ Craft ~
Warning: terrible picture thanks for the impending downpours that day 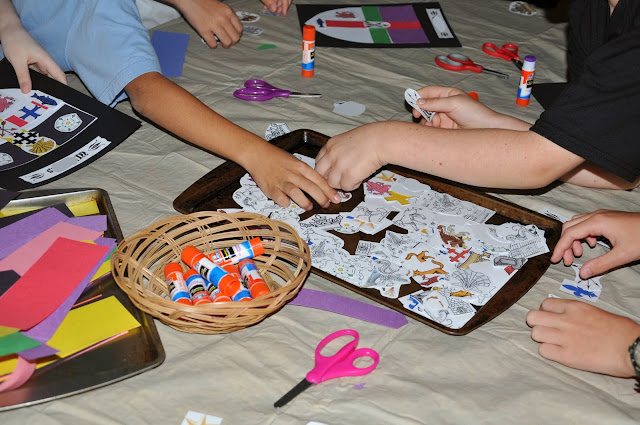 For an activity, each child made their own coat of arms. They each had a shield that they glued onto black card stock. There are tons of free templates out there. I used one similar to this one. I printed out lots of different symbols and decorations for them to glue on to their shield also mottos to choose from. I also cut strips of construction paper in different colors for anyone to add. Colors are very important in heraldry as each color has its own meaning. (Some of them I kind of fudged a little to fit the colors I had.) I glued a strip of the construction paper next to the word I thought it represented on this sheet.  They also chose a motto from some that I found here and printed up. Once everyone was finished, I had their last names already printed out for them to glue at the top and they shared with the group why they chose the symbols they did. BigBoy said he chose a shell because it reminded him of Cupcake's Baptism. (Melt my heart! Don't worry, he also chose a Badger because he's a Hufflepuff, so he's a real kid too.)

~ Snacks ~
For snacks, I chose three themed based snacks (although two would have been fine). Everyone knew that Lancelot was from France so I prepared some simple cheese croissants (stick a piece of cheese in a croissant, yeah... that simple) to represent France.
Since one of the stories involved Guinevere accidentally giving a poisoned pear meant for herself to another knight and being charged with murder, my girls sliced some pears (non-poisoned ones).
There is also a story in the book about Sir Lancelot plunking acorns down from a tree onto the head of another knight so we thought these little candy acorns would be kind of fun. (I used butterscotch chips for the top and extra melted butterscotch chips to glue them together.)


~ Extra Activity ~
I had planned about 2 hours of time for book club and I think that was a bit ambitious on my part. I've told the parents that next month will only be an hour and a half. We had some extra time at the end and since the rain hadn't started yet, we played a little bit of Blind Man's Bluff which is a medieval game!

I hope to be better organized about sharing our book club plans in the future. Maybe it will inspire someone else to start up a club for their kids. It doesn't have to be elaborate. I did all of the prep work of for the craft a couple of weeks before. And having my big kids on hand made it even easier!

Links to all of the documents:
Talking Points
Heraldry Symbols (with Papal Coat of Arms)
Meaning of Colors
Heraldry Mottos (the formatting looks a little wonky, don't know why... hmmmm)
Snack Labels