WWRW: How I Killed Pluto... 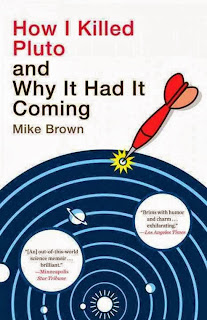 I had to stop and think about what I was reading this week because I've hopped around between a few things. I checked my Kindle app on my phone and I realized that I never blogged about How I Killed Pluto and Why It Had It Coming by Mike Brown {affiliate link}. Melanie recommended this book a while back and I immediately let The Professor read it, being the most avid astronomy buff around here. He enjoyed it so much that we brought it to our teen book club as our suggestion for the coming year. It's the only non-fiction book that they will be reading this year but it's written in such a conversational tone I don't think the kids will think it dry or boring. I'm typing this review up on the fly right now because I can't write a serious review about non-fiction. I just can't. I don't know why. It's an entertaining book to read and definitely keeps you engaged. I think the way Mike Brown interspersed personal accomplishments along with scientific ones kept the book from even the slightest bit of dryness, along with his clever way of explaining science in layman's terms. It's been way too many years since I took college astronomy to follow anything more complex than layman's terms.

I don't want to give away too much but most people know the ending (No, Pluto is not a planet anymore. Yes, it is a dwarf planet. No, a dwarf planet is not just a really tiny planet.) but you need to read the book to follow the intrigue that goes along with the story (sly Spanish astronomers secretly stealing Santa!... read the book!) and the way a scientist responds to sleep deprivation coupled with newborn cuteness! His wife had the presence of mind to put the kibosh on any baby experiments, thank goodness!


After cat, Lilah next learned flower. Flowers (scrunch up nose as if sniffing) were everywhere, first only outside on plants, but soon she generalized to flowers on her clothes or her shoes, or in pictures in books and magazines. I wanted to hook up wires and do experiments and comparisons and studies to understand it all.
“You want to do what?” Diane would say.
But, really, who wouldn’t? In our own house the most extraordinary thing in the universe was taking place, and it was passing by unexamined, unstudied.
“There will be no Lilah experiments,” Diane declared.

Just before I finished the book, I had the opportunity to go back to my alma mater and do some star gazing with Dr. Olenick, my astronomy professor from college, at the Alumni/Family Weekend! He spends his summers with students looking for wanderers in the sky just like Mike Brown. The Professor (my oldest son) got to meet my professor (Dr. Olenick) and was able to see some cool stuff up in the sky through the telescopes there on campus...you know...just the Ring Nebula, some binary stars, cool stuff like that. I had a chance to talk to Dr. Olenick about this book and ask him his opinion on Pluto's status (totally not a planet). He's kind of a quiet man and I don't know if he's read the book or not (probably not) but he did comment on the intrigue when I mentioned the sneaky Spaniards. He said there is a fine line that they walk between trying to be the first to announce a discovery but also wanting to get their information correct. I told him as an outsider, it seemed a little chaotic and disordered. Why not come up with a system for making a claim, submitting research, etc? You know... wanting to organize it (like the mom I am). He just sat there and smiled. I asked, "Or is that part of the fun?" And he grinned even bigger. He's just a big kid, I tell you! (I think most scientists are.)

Check out what everyone else remembered they were reading this week over at Housewifespice!

P.S. For moms who want to know... part of this story includes dating, vacationing with and then marrying his wife. While they don't make a big deal out of it in the book, it is obvious to discerning readers that they moved in together before they were married. Nothing intimate is ever discussed. It's a minor blip in the story for most people today, but it might provoke a question or two.