So, the Mommy Wars have been raging I guess over St. Nicholas vs. Santa Claus. I say, "I guess", because I refuse to read all the click-bait gems that are popping up in my news feed. Most times, the title tells you all you need to know.

I'm not going to tell you what you should or shouldn't tell your kids about Santa Claus vs. St. Nicholas. I have no authority from which to speak, except in my own family, but I recognize that that authority does not translate to worldly or internet worldly authority no matter how amazing or awesome I think my family's traditions are.

It's not my job. It's not anyone else's job. It's your job to figure it out. I will tell you that I think you should sit down and discuss it with your spouse first. Decide what your goals and desires are for your family. Think long term. Discuss honestly what you loved about being a child at Christmas and what you didn't like and be prepared to compromise and make allowances. (Hopefully you have a husband who is willing to discuss this with you.) For us, all of the wonderful, fanciful stories and legend of the right jolly old elf are like the ultimate fan fiction! Let me tell you how we got here...

When my oldest was a babe, Sean and I talked about our family traditions and what we remembered loving as a child. Frankly, the whole elves and North Pole aspect of Santa Claus never made the cut. Especially Mrs. Claus. It was weird. For both of us. His family celebrated St. Nicholas Eve by leaving their shoes outside their door and finding a treat inside the next morning. He remembers vividly the year he found a note saying he had received a new baby brother instead of a candy bar. So we've done the shoes/slippers for St. Nicholas ever since the big kids were little. But in his family, like mine, Santa came back on Christmas and dumped a pile 'o stuff under the tree and in the stockings. And the one thing we both remembered was feeling that law of diminishing returns in action on Christmas Day. The more presents we opened from Santa, the less exciting they were. Maybe that wasn't the case for you, but we both felt like one or two carefully chosen gifts for each child would be more exciting than a pile of stuff. 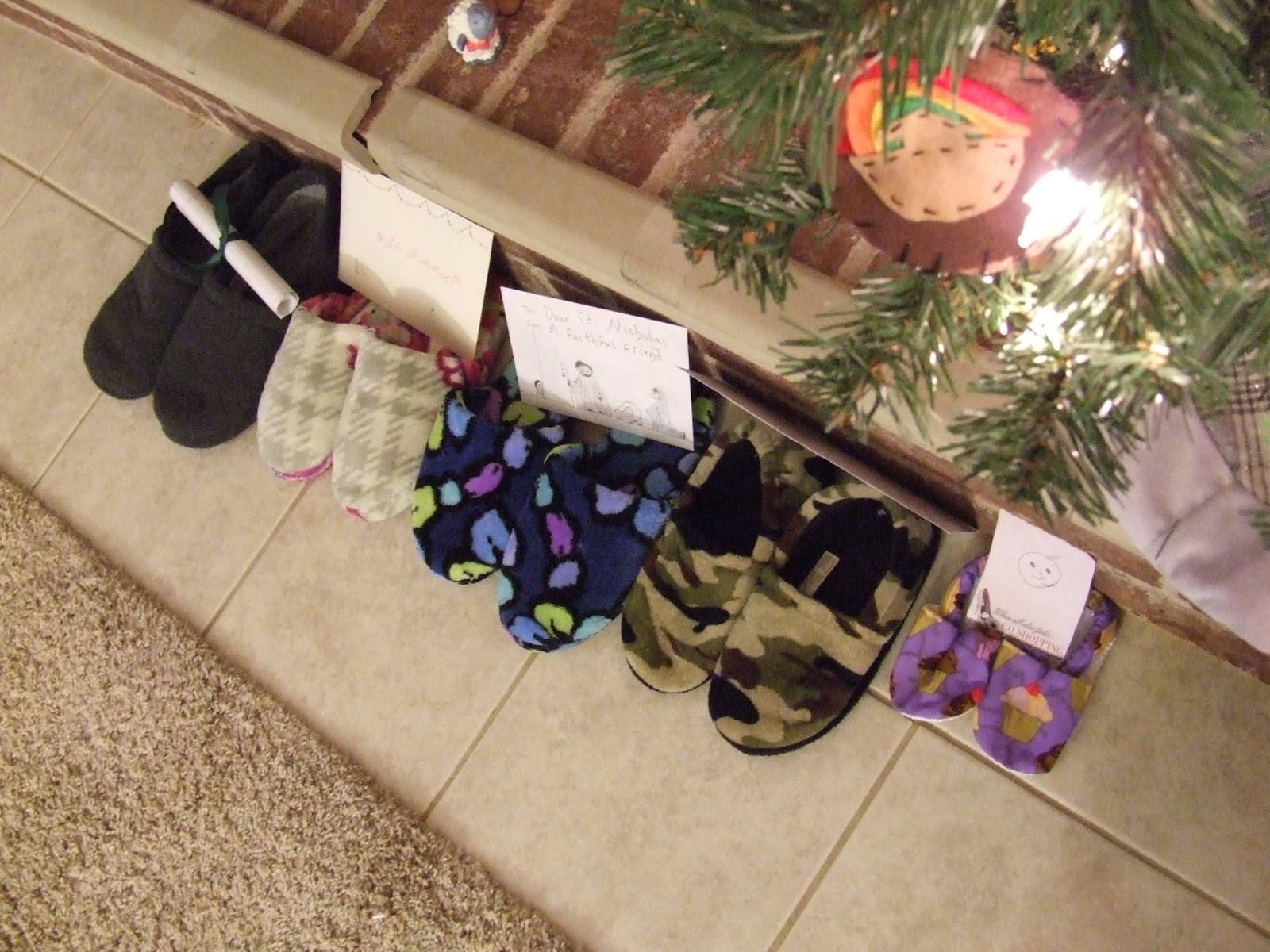 Since we knew we were going to teach our kids that St. Nicholas was a real person who was now a saint in Heaven as part of their religious education, we wanted our children to know that St. Nicholas practiced moderation. That he could not be expected to bring ALL of whatever their hearts desired. So we limited his scope to the stocking only. If it will fit in a stocking… St Nick has a thing for foot wear, I guess… then you can ask him for it. My husband was adamant about this and I'm so glad we followed his lead although there have been a few rare years when the packaging of a special request would not fit in a stocking and so the child would find their stocking draped over it. 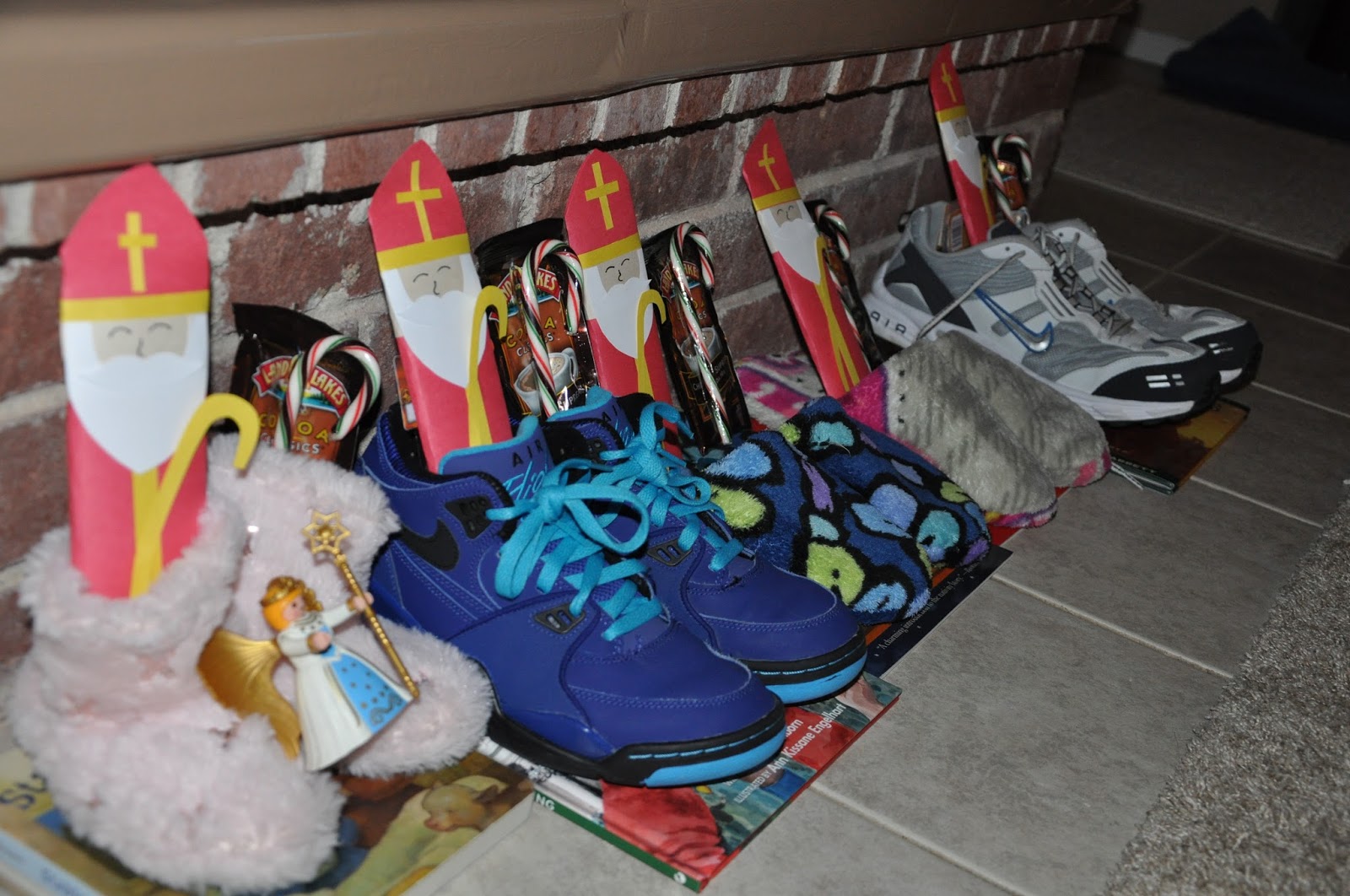 Now, please don't think that our children are deprived of gifts. They get gifts from three sets of grandparents, two of whom usually give family gifts and one who tries to pick something special for each child and usually can't contain herself to just one thing. Some of them also get gifts from their godparents and then there are ornaments, books, games and hot cocoa packages that come from aunts and uncles for the whole family to enjoy. We also give each child a stack of books and usually a bigger special something or a couple of little something specials that we know they have been wanting but never asked for from Mom and Dad. Those go under the tree and they say, "From Mom and Dad". 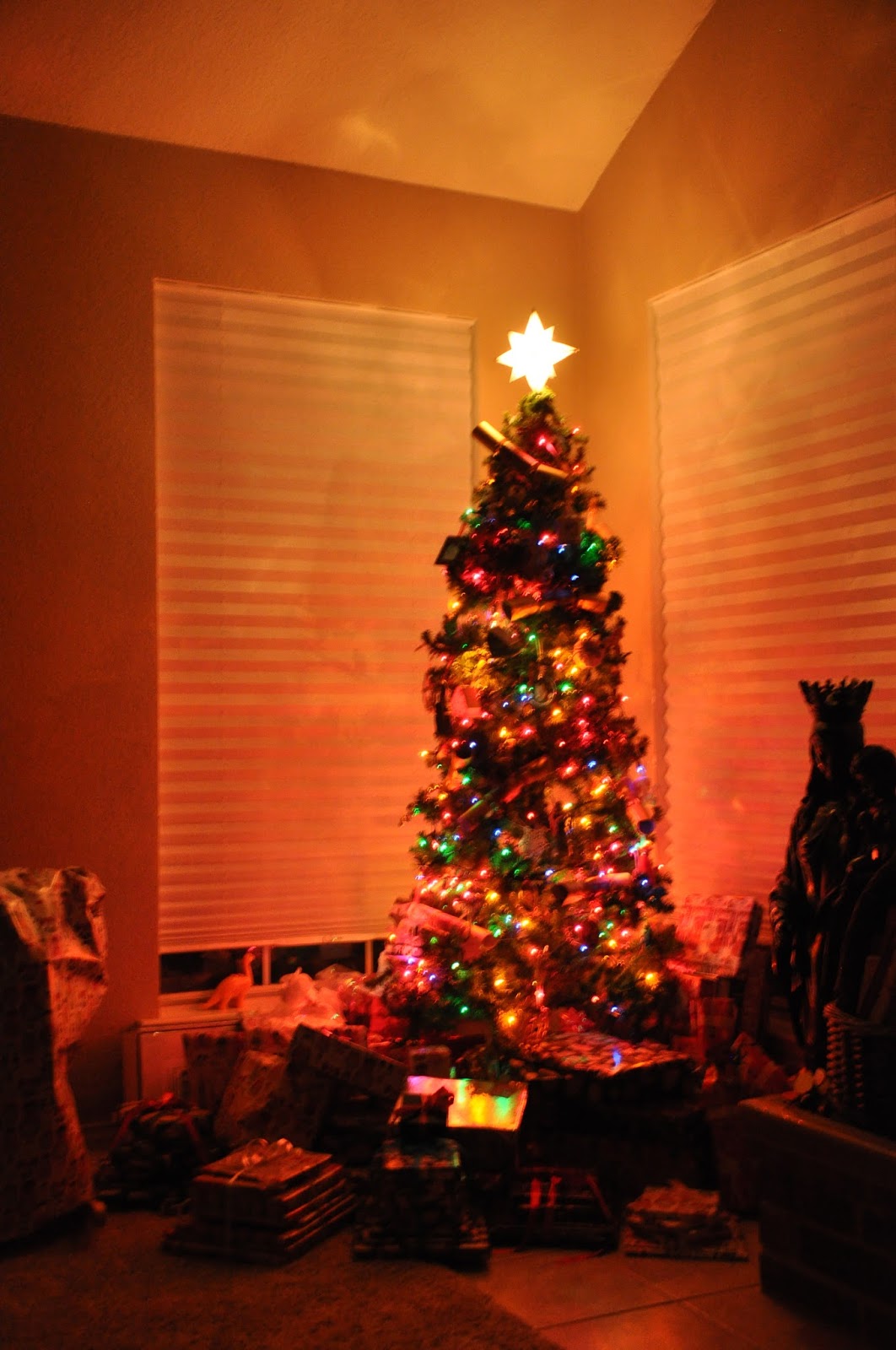 We never liked the idea of everything under the tree being from Santa because when the "real world" runs into that "reality" that's been created, it seemed like too much of a let down. St. Nick is only one of the many generous people in our lives. And yes, we do let them believe that the stocking gifts are left by him. We don't tell them any differently until they are old enough to ask and know. By that time, we talk about the spirit of St. Nicholas still inspiring us today, because he does in very real and tangible ways the way that many of our saintly friends lead and inspire us. That has made the transition from childhood to young adulthood so nice. The older children have insisted on maintaining that spirit for the little ones because it was such a treasured part of their childhood. 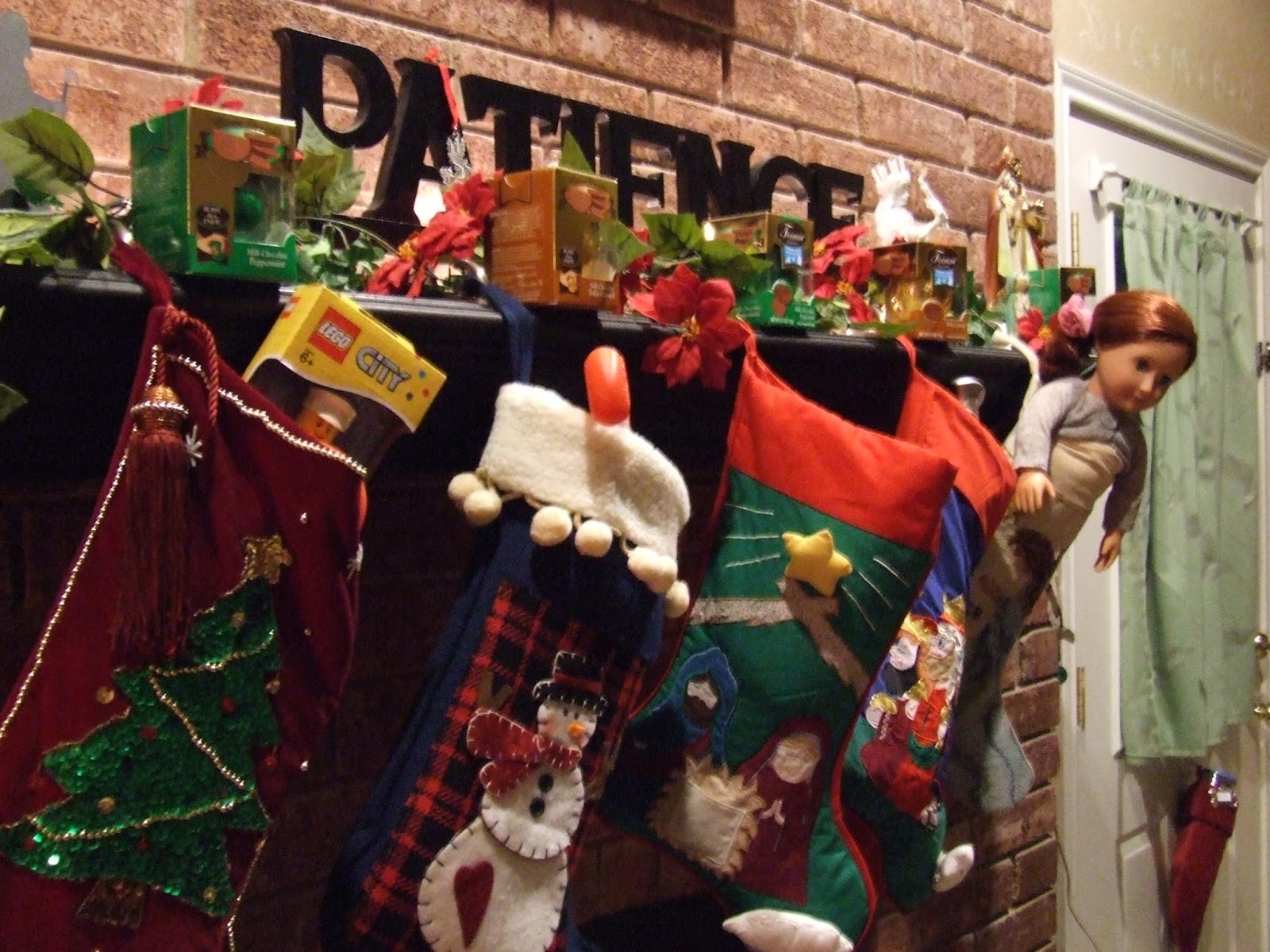 Some of the aspects of the secular Santa story have made their way into our family. Our children write letters, asking for a special gift (one small enough to be left in a stocking) and leave them in their shoes on the eve of his feast day. St. Nick, much in the same vein as Tolkien's Letters From Father Christmas, writes them letters in return sometimes with fantastical stories but always with a request to work on a particular virtue for the rest of Advent and a promise that he will return on Christmas to celebrate the birthday of our Saviour! We leave milk and cookies for him, although everyone knows St. Nick really prefers homemade fudge, and the stockings (his gifts) are the first things my children run to in the morning leaving all the under the tree gifts until we return from Mass.

So you see… we do still do some of the Santa Claus traditions. But we decided a long time ago that the elves and the North Pole and the reindeer and the Mrs. Claus were like… fan fiction. Stories that people wrote about a character from history that they obviously respected and admired enough to write stores about. And we certainly enjoy writing and reading fan fiction around here, so to call it "fan fiction" is not a denigration in any way! It works for our family and it allows us to enjoy both the religious and secular aspects of good 'ole St. Nick. 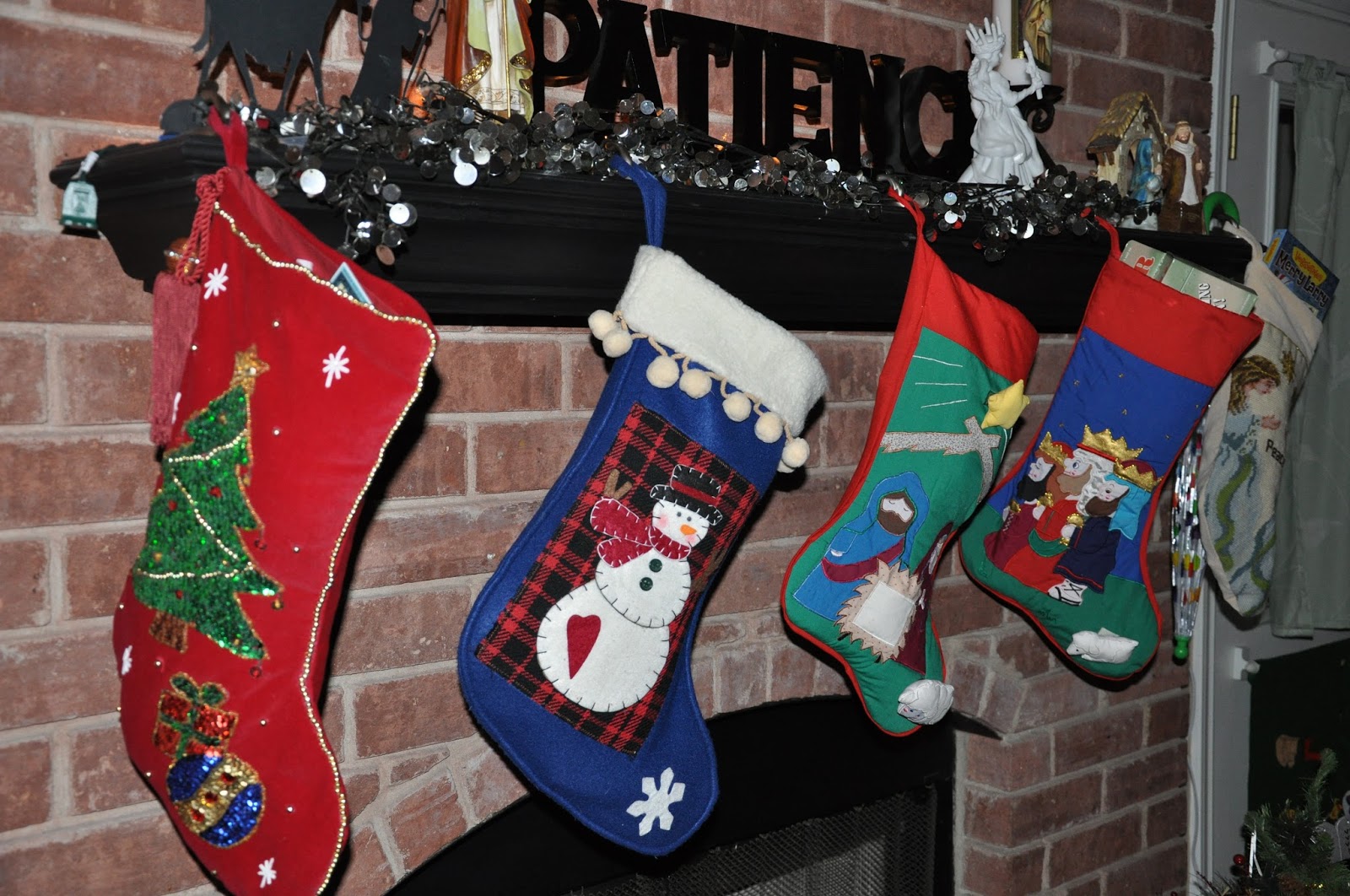 My kids have seen Frosty the Snowman where Santa comes to save the day and turn a puddle of water back into the beloved snowman from New York who can only count to 5. They've watched Hermey fulfill his dream of becoming a dentist. They've set out cookies and milk and letters to St. Nick.

But YOU have to do what works for your family without guilting anyone else to do the same or guilting yourself over choosing to do it differently. What we sat down and talked about 18 years ago has paid off for our family, giving us the kind of holiday season we enjoy most. You don't have to accept whatever the culture hands you. You are the parents. You can pick and choose. You can make it work for you or dump it all together. If you have your family's best interest at heart, you will not ruin your children for letting them believe in elves and flying reindeer and you will not ruin them if you don't. One thing is certain, you will have a lot of questions to answer, so you better be prepared for them. Parenting isn't easy whichever way you go.