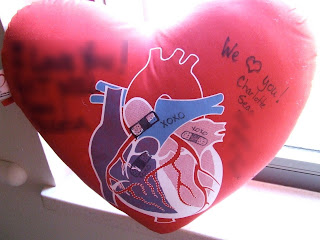 My father had heart attack #5 the night before my birthday and was in surgery for a triple bypass the day after. His first heart attack happened in 1983. I teased him that if he was trying to keep pace with Dick Cheney that was a race he didn't want to win.

I spent Friday driving many hours to be with him. Thank you for all the prayers. I was assured by his nurses in the ICU that his surgeon is a good one and that he was in good hands. Of course, he didn't think I should bother with driving all that way to come see him but when you only have one daughter and five heart attacks, you don't get to make that decision.

Up there is a picture of the pillow that they give patients who have open heart surgery to squeeze should they need to cough. The pressure on the incision sight dulls the pain a bit. (I've learned more about open heart surgery recovery than I ever cared to know.) It came with a marker and I wrote all of our names on my daddy's heart. I also drew three Band-aids with hugs and kisses. He should be able to go home in a few days and then the really hard part hits... therapy and change. Neither things my father is good with.

I was nine years old in 1983 and too young to be allowed into the ICU to see him for that first one. I wasn't there when the other three happened so this was the first time I had ever seen my father hooked up to tubes and drips and machines with beeps and alarms. Maybe this is what everyone should see before they clap and cheer for a return of "real, manly men". Hard headed, cigar smoking, beer guzzlin', red meat gulpin' men end up flat on their backs with a machine pumping their blood through their body while a surgeon stands over them fixing their broken heart... all the while, a daughter's heart is breaking on the highway. 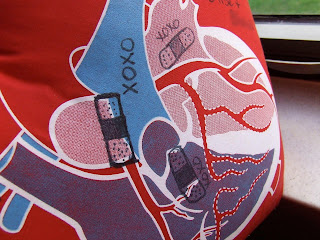 A manly man takes care of himself because he knows his family loves him. A real man is smart and not afraid to admit his weaknesses if it helps him to improve them. I know that ad campaign was designed to be bold and humorous, but sadly, some people are silly enough to think that it's "so true". Yes, Real Men, wear the pants in the family. Yes, Real Men, help those in need. But it's not emasculating to eat a salad or watch your fat intake because, let me tell you, there are no pants in the S.I.C.U.